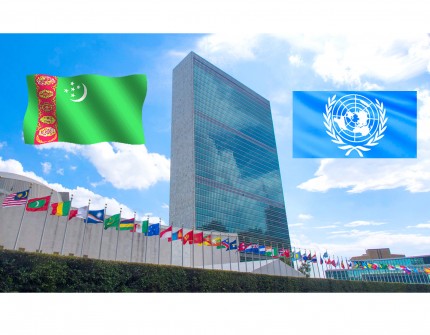 ASHGABAT: On the 2nd of August, the Deputy Chairman of the Cabinet of Ministers, Minister of Foreign Affairs of Turkmenistan Rashid Meredov reported to the President of Turkmenistan Gurbanguly Berdimuhamedov that during the 96th plenary meeting of the
75th session of the UN General Assembly, the Draft Resolution initiated by Turkmenistan entitled “Strengthening the links between all modes of transport to achieve stable and reliable international transport for sustainable development during and after the coronavirus disease (COVID-19) pandemic” was viewed.
The Resolution that was cosponsored by 48 states was adopted unanimously. The head of MFA congratulated the President of Turkmenistan with the external policy achievement and underlined that the adoption by the UN General Assembly of this Resolution initiated by the head of state serves yet as one more proof of thoughtful approach of the state to the issues of strengthening international transport cooperation with the aim of sustainable development that is particularly consonant with the international and regional efforts on overcoming the pandemic, its economic and social repercussions.
The given Resolution enriched the sequence of Resolutions in the area of sustaining collaboration between all modes of transport adopted in 2014, 2015 and 2017 upon the initiative of Turkmenistan. It was stated that the principles embedded in the Resolution
are coherent with the process of establishing multifaceted system of transport communication launched upon the outcomes of the First UN Global Conference on Sustainable Transport that was held in Ashgabat in November 2016. In this context, the Resolution also points out the importance of the International Conference of transport ministers of developing landlocked countries planned to take place in Turkmenistan
in 2022 .