The political gimmick and future of Pakistan 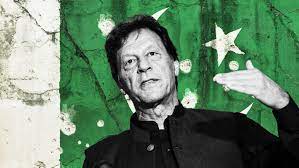 Minus the nation, ‘power’ is the ultimate goal of all stakeholders

—Pakistani politics is steadily transmitting into a chaotic state. The language and conduct of political leadership are so bizarre that leave an impression of their immaturity and carelessness towards the country and nation. At a very crucial stage, when the worst economic crises have gripped the country’s growth, Pakistani political leadership is screeching over their sole right of ruling the nation.

Former Prime Minister Imran Khan, the chairman of Pakistan Tehreek-e-Insaf was removed from his office at midnight 9th April 2022 as a result of a vote of no confidence against him by the united opposition. As many as 174 members out of a total 342 have voted against Imran Khan to oust him from the country’s top slot. Earlier on 27th March 2022, Mr. Khan in a public address in Islamabad waved a letter naming it a diplomatic wire as proof of an international conspiracy against his government. He said the international agenda was triggered with the help of Pakistani opposition leadership and it was direct interference in the country’s affairs for which he named a US diplomat later on in his speeches. He demanded the formation of a Judicial Commission to probe into the matter and unveil the conspiracy against his government.

National Security Committee (NSC) on two different occasions declared that there was no evidence of direct involvement of international conspiracy against Mr. Khan’s government rather it was a use of undiplomatic language from a US official with the Pakistani ambassador which was transmitted through a ‘Cipher’ to Pakistan as per standard norms. The newly emerged united opposition’s government under the prime ministership of Mian Muhammad Shahbaz Sharif offered an inquiry into the matter but PTI leadership remained adamant about the formation of a Judicial Commission. Apparently, PTI demand is a simple matter and it should be fulfilled without hesitation from the government however, two aspects are vital to consider before taking any initiative. First, the history of Judicial inquiries in Pakistan is neither clean nor fruitful, and secondly, whether the formation of the Judicial Commission and the outcome would be acceptable to all stakeholders or not.  The potential answer is ‘big no’ considering the attitude of political parties in Pakistan.

Imran Khan has addressed the public in several cities since he has been ousted from the Prime Minister’s office and organized a long march to Islamabad on 25th May 2022 against the incumbent government by demanding the announcement of general elections. He has criticized the American influence in Pakistan, the role of the military establishment for their pick and choose policy and for becoming ‘neutral’ all of sudden in the political sphere. He also blamed all political parties who are part of the current government for playing a puppet role to topple his government and becoming a source of destabilization to a prospering country under his leadership. In his most recent speech, he added the role of India and Israel as well in the conspiracy against his government.

Mr. Khan is quite famous for the ‘U-Turn’ policy on his decisions and statements. Also, he earned fame for giving unique ‘descriptions’ to various political terminologies as he told the nation that ‘neutral’ is synonymous of ‘animal’. He is continuously giving shocking statements in his speeches including the most controversial about existence of Pakistan as one unit.  Imran Khan is blessed with blind followers who believe in his words without many noetic efforts. He has social media brigade to curse the opponents and anti-viewpoints. The PTI fear-less social media warriors have no mercy for the social, political, religious, and constitutional norms as they troll every single voice against them considering it a sole right. The party leadership appreciates all such efforts be it below the bar of decency and morality. Mr. Khan has introduced a new style of politics in Pakistan where values and morality have no place and consideration.

By criticizing Mr. Khan’s style of politics, it never means that other political parties and leaderships have an ideal role to quote as reference.  Pakistan Muslim League (N) has voiced the slogan of ‘Respect for Vote’ when former Prime Minister, Mian Muhammad Nawaz Sharif had to leave the office as a result of the Supreme Court’s decision against him in April, 2017. At that time PML (N) registered their protest against the military leadership and establishment for being the source of judicial activism against them. In most recent events, it is evident that PML (N) forgot the slogans they chanted against military leadership and dreams ofcivilian and democratic supremacy. Apparently, their grief and happiness are tied with ‘power’, and slogans like respect to vote or civilian supremacy are only used in public to play with their sentiments.

Pakistan People Pakistan (PPP) is the beneficiary of former Prime Minister Zulfikar Ali Bhutto’s politics and his judicial murder. Starting his political career with a military dictator, Mr. Bhutto used catchy slogans of public welfare and became a popular leader in a short span. Later his legacy was carried out by his daughter and former Prime Minister, Mohtarma Benazir Bhutto Shaheed. Since, the command of PPP transferred to former President, Mr. Asif Ali Zardari, the dynamics of their politics are reshaped. Mr. Zardari is famous for the politics of ‘make and break’ and his magic lies in money.  Once, the party was considered the biggest opponent of military leadership in Pakistan has turned into the sole facilitator for establishment. Their core objective is to remain in power in Sindh province. The PPP’s role in national politics is dependent on the ‘signals’ from the military establishment and they remain ready to perform the assigned duty. Political parties like PML (Q), MQM, MMA, GDA, and BAP have always performed a puppet character in politics as their limited number of seats in national or provincial assemblies are used to make or break the governments. These obedient parties are only answerable to their real lords but not to the public so the lessons of political values and morality are useless for them.  The use of religious and community slogans are identification of JUI (F), Jamat-e-Islami, and ANP however, they perform the duty for military establishment as and when required.

Values and morality are useless aspects for political parties

The use of language, stand on principles, and caring for values in politics have no space in Pakistan as the political leaders of all parties have proved that being in ‘power’ is the only standard principle. Through a careful review of Pakistani politics in recent years, a layman can easily understand that all political parties have the pain of ‘common man’ until they are not in power. Every government memorized the lesson to put the responsibility for all disasters on the outgoing government.

The constant role of military establishment in Pakistani politics is an ‘open secret’ now. The credit goes to Mr. Imran Khan that he publically exposed the role of the establishment in designing the governments at their will and wish. The military leadership and establishment have never been able to stop them from political interference although they wished not to be discussed in the public domain for their unconstitutional role. Mr. Khan being himself a beneficiary of their political role has now intentionally or intentionally exposed their role in public gatherings. He also questioned the role of the judiciary in Pakistan for their controversial decisions. This organized criticism has boosted the confidence of the common man to make a question from the judiciary for their failure to deliver justice. Though, our judiciary never learned from the past and always provides the essence for criticism through their shabby decisions.

Considering the current political and economic circumstances, the mantra of democracy, justice, and uplifting of the constitution sounds ineffective. The politicians be in the government or in opposition, judges, military establishment, and other elites have no concerns with the miseries and hardships of the nation. All of them are quite successful in their agendas without much hassle. They have stories to share with the public by abusing the opponent and playing with the sentiment. This chaotic situation is leading nowhere but to a state of catastrophe. All political parties, military leadership, and the judiciary who have a pivotal role are required to come out from their ‘Ego-Shell’ for the sake of Pakistan before it becomes too late to recuperate the national calamities.

Munir M Hasan, PhD These days’ two issues are vehemently being discussed in the media by the politicians, anchors, various commentators and others. These relate...
Read more
Editorial /Articles