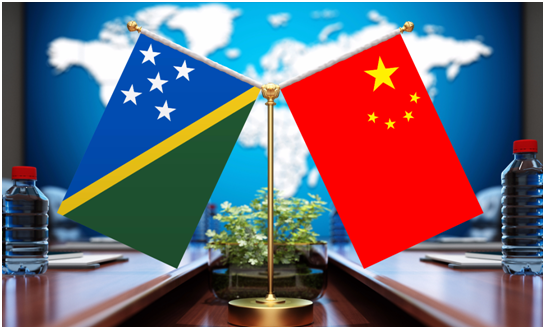 The Security agreement which was inked between Solomon Islands and China on 5 My 2022 allows a critical position to Beijing through which it can exert control over adjacent waters and air space, possibly dominating the sea lines of communication mainly between US and Australia. Moreover Chinese naval presence in the Solomon Islands can used for interdiction of any military reinforcement to Taiwan and intelligence gathering which can complicate defence planning for Australia and, to some extent, the United States. Lately On May 26, 2022 Chinese Foreign Minister Wang Yi introduced the eight-pronged important consensus reached by China and Solomon Islands on enhancing mutually beneficial cooperation during this visit. It will be relevant to have introduction of Solomon Islands before analysing the possible opportunities out of eight pronged consensus for Pakistan.

Solomon Islands is a sovereign country consisting of six major islands and over 900 smaller islands in Oceania. It has a land area of 28,400 square kilometers and a population of 652,858 with as Honiara capital, which is located on the largest island, Guadalcanal. The islands have been settled since 30,000 BCE. In 1568, the Spanish navigator Álvaro de Mendaña was the first European to visit them, naming them the Islas Salomón.Name was changed “Solomon Islands” in 1978. At independence, Solomon Islands became a constitutional monarchy under Queen Elizabeth II, represented by the Governor-General. Solomon Islands is a constitutional monarchy and has a 50 member parliament with Prime Ministers head of government.  Solomon Islands is a member of the United Nations, Interpol, Commonwealth of Nations, Pacific Islands Forum, Pacific Community, International Monetary Fund, and the African, Caribbean, and Pacific countries. The islands’ ocean-equatorial climate is extremely humid throughout the year. Solomon Islands’ per-capita GDP of $600 ranks it as a lesser developed nation and more than 75% of its labour force is engaged in agriculture and fishing. Most manufactured goods and petroleum products must be imported. Only 3.9% of the land is cultivable as 78.1% are covered by forests.

.           Although this agreement is for mutual benefit of both countries however while considering the facets like Chinese assertiveness in Oceania, geo-strategic location of Solomon Islands along vital US Sea Lines of Communications and allied concerns the agreement will have impact on Pakistan too. It will be relevant to analyse all the eight points separately.

Wang Yi wrapped up his visit to Solomon Islands on the first leg of his tour to the pacific Island Countries, which will allow Beijing to have pragmatic access other Island nations like Kiribati, Samoa, Fiji, Tonga, Vanuatu and Papua New Guinea as well as Timor-Leste between Second and Third Island Chains. Being a trusted and time tested ally of China, Islamabad should also extend its bilateral and multi-lateral relations with Solomon Islands. Pakistan should also take the opportunity to establish trade relations with Island nations initially in field of defence.

Munir M Hasan, PhD These days’ two issues are vehemently being discussed in the media by the politicians, anchors, various commentators and others. These relate...
Read more
Editorial /Articles