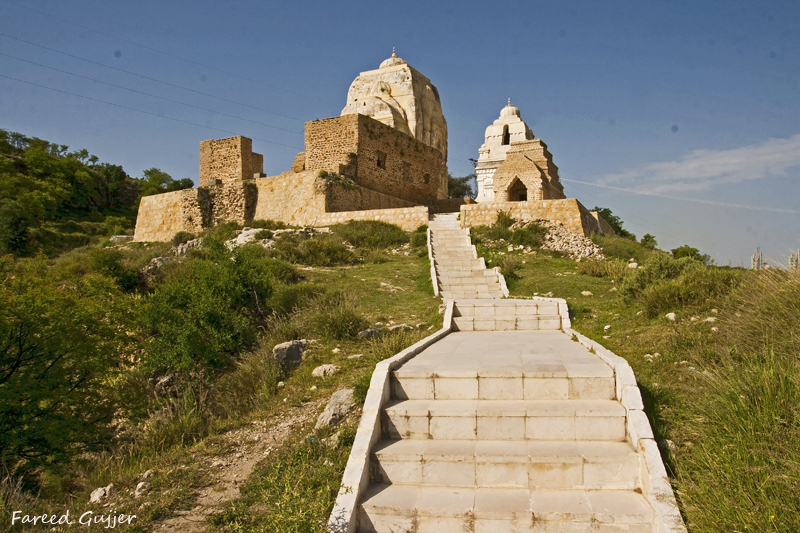 The Katas Raj Temples are a compound of Hindu Temples connected to each other through paths located in the Potohar Plateau region in Punjab. The site holds immense religious significance for Hindu’s on account of their belief that the temples’ pond formed through Shiva’s teardrops after the death of his wife, Sati. The word Katas is derived from a Sanskrit word meaning tearful eyes.

Regardless of this site’s great importance and cultural richness, government authorities have failed to provide adequate attention or allocate the right resources towards it. In 2012, the water levels of the pond decreased because of the construction of nearby cement factories: Bestway Cement, DG Khan Cement and Dandot Cement. The tremendous amount of water usage as well as the plantation of water-avid eucalyptus trees immensely lowered the water table. Regardless of the installation of Shikaras and a water filtration system for pilgrims, the water levels once again plummeted in 2017.

In 2017 during a court hearing, Chief Justice of Pakistan MianSaqibNisar noted, “This temple is not just a place of cultural significance for the Hindu community, but also a part of our national heritage. We have to protect it.” Even though the cement factories were told to obtain water from elsewhere immediately, this problem still prevails today.

During a visit to the Katas Raj Temples, an interview with the tour guide and care-taker revealed the opinions of the locals in the area. He believes there are a lot of tourist spots within this part of the world, but not nearly enough maintenance or resources to ensure their upkeep. Katas Raj has been described as a gold mine: if properly conserved, it could result in endless returns.

Regardless of belonging from a different religion, it seems that the locals realize this site’s potential even more than officials and care for it to the best of their abilities. The care-taker stresses upon the need to think neutrally: “think back to the philosophy that Pakistan was made on!” He takes us back to Jinnah and Iqbal’s ideas and how with the creation of Pakistan, people of all religions were meant to be liberated. At the end of the day, Katas Raj is still a part of Pakistani culture.

Since the site is both historical and religious, ticketing is a sensitive and tricky factor. It is difficult to verify the difference between sightseers and those there for religious purposes. The government needs to implement a ticketing system within Katas Raj Temples and figure out how to differentiate between Hindus, Sikhs, and tourists, as well as how much to charge tourists. The revenue earned from this approach can then be reinvested into the site’s restoration and maintenance.

The tour guide tells us how 3 cement factories were constructed 2km away from the Katas Raj Temples – legally, such construction should not be allowed near population, tourism, or heritage sites. The government should be working on developing tourism in these areas rather than engaging in aiding industrialisation. He notes that the water levels have immensely decreased due to the turbines of the cement factories which caused the springs to disconnect. The water, which was once blue, is now murky. Initially, there were 12 springs. Now, just one tubewell remains which stops functioning when there is no electricity. The motionless water on its own creates endless problems, and the cleaning of the water proves to be a strenuous task as well. If factories manage their water in other ways, Katas Raj’s water levels will automatically increase again. With the construction of dams, rainwater could easily be collected and utilized.

He notes how original material is not used within the restoration of the site due to being more expensive. This is due to different organizations being in charge of restoration at different points in time. In reference to the significance of proper, authentic restoration, the tour-guide says, “Without it, there is no mark of this site being thousands of years old.” Alongside the difference in aesthetics that the various materials cause, there are also issues of protection from rain and other natural factors in the case of materials such as wood. He believes it is important for officials and organizations to be fined/removed for bad work. Without a system of accountability, history is slowly but surely being erased and newer generations are left with more and more unanswered questions about their own land.

He acknowledges that in recent years, with Pakistan Tourism Development Corporation (PTDC) in charge, measures have been taken to ensure higher security. A boundary wall was finally constructed, care-takers and guards were appointed, and cameras were installed. However, there is still a lot of work that needs to take place.

An interview with an individual working on the development of tourism confirmed that there is a crucial need for the implementation of the law in regards to tourism within our country. There is barely any tolerance or awareness in our society. The individual claims that our government is capable of carrying out the needed changes, but it does not have enough of a bandwidth to deal with these issues. However, in close collaboration with the locals, Katas Raj Temples can definitely be properly restored.

This individual highlights the need to change the setting and make it look more like a holy site in order to honor its background. Promotion will also be a lot more feasible if there is visa ease for Indians. The government has taken initiative towards tourism promotion recently by installing boards about the Katas Raj Temples on Multan Road, but these steps should be developed further so that tourism can be properly boosted.

When inquired about potential causes of mistreatment, the individual admitted that the work that has taken place has not been of quality. Another major cause of mistreatment is corporate interest. Legislature is very limited in terms of environmental protection. Legally, it is not allowed for factories to be in such close vicinity to cultural sites or to the population, but the factories themselves have gotten No Objection Certificates from the government, meaning it is exceedingly difficult to take any action against them.

On the topic of comparisons of other heritage sites and their preservation, this individual mentioned that instead of looking towards other sites for inspiration, Katas Raj should itself be a model tourist site. Since this site is so unique and complicated in its own way, it is necessary to devise a framework that is specific to the Katas Raj Temples, which can then be used as a model for other similar sites. He mentions that departments lack resources, and that the state is not interested enough to take any major steps for proper restoration or maintenance. Even the departments that do have knowledge on what to do lack the skill set to carry it out; they are not given enough time by the government to do anything, resulting in rushed restoration of bad quality. He mentions that the Evacuee Trust Property Board (ETPB), which is currently in charge of restoration at Katas Raj, has enough of an understanding on what needs to be done, but lacks the skill set and expertise to carry it out. ETPB is now in search of skilled individuals since it lacks expert restorers. Individuals who are appointed to work on such sites only come for brief times and work on minimal restoration which is not even implemented properly, much less maintained.

When asked about reliable protectors, the individual mentioned Aga Khan Foundation which has been doing some of the most elaborate and detailed work. It carried out state of the art restoration, as can be seen by the restoration done in Wazir Khan Mosque, JugirJee, Delhi Gate, ShahiHamam, and Chauburji. The United Nations Educational, Scientific, and Cultural Organization (UNESCO) has also briefly been in charge of projects and has funded restoration, but does not have as much control. Walled City Lahore Authority (WCLA), a government authority, has done wonders and restored many sites recently, such as the Mural Wall in Old Lahore. ETPB is trying to do sufficient restoration and has a strong focus on Sikh sites. However, the quality of ETPB’s work majorly depends on the appointed restorer. Some sites have been restored properly, while others have suffered.

In terms of the future of Katas Raj Temples, the individual mentions that ETPB has stepped in just at the right time. External pressure is mounting, thus pushing the government to pay higher attention towards such restoration. With the right people appointed, the originality of the site could definitely be reinstated with future restoration.

After observing the site and getting to hold interviews with relevant individuals, there are many questions that are raised and subsequently answered: Why is nothing being done to preserve the temples? Why is there a lack of intervention by the government? It is clear that the government does not see much of a benefit in investing in the restoration and management of such sites, but it is imperative for that importance to be realized as quickly as possible. As soon as it is, Katas Raj will be able to bring higher returns to our economy.  There also needs to be better awareness campaigns about the heritage and cultural richness of this site instituted for people across Pakistan, and more importantly, across the world.

It is clear that the chaotic manner of restoration experienced by Katas Raj Temples is due to constant changes in the departments or organizations responsible for restoration. Efficient restoration requires the appointment of a competent authority and knowledgeable individuals. This will allow the themes and aesthetics used during restoration to remain consistent with the original site.

It is clear that people on these higher seats do not have sufficient knowledge or expertise. They have never done work on such sites before. Thus, they cannot give directives or executive orders the way a technocrat could. It is easy to give surface level, black and white solutions without any context or comprehension; deeper understanding and higher proficiency is what is truly required. This shows how restoration can only be successful with the help of knowledgeable technocrats.

With the correct policy directives and government intervention, Katas Raj Temples could contribute a great amount to our economy, and serve as a model for the many unattended cultural and religious sites in our country.