Role of media and academia needed to tackle maritime blindness 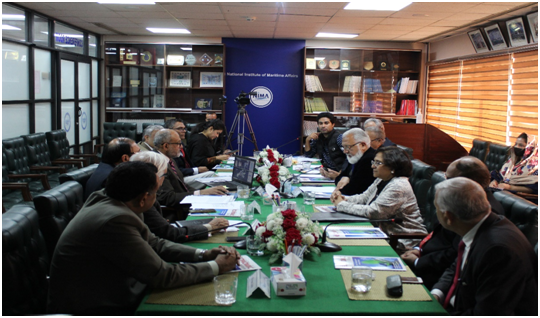 ISLAMABAD: There is a dire need to tackle maritime blindness in the country by creating awareness among the masses, and contemporary media is pivotal in doing so, said the Guest of Honour Vice Admiral (Retd) Abdul Aleem HI(M) while addressing the webinar titled Raising Maritime Awareness and Launch of Economic Affairs Magazine (Special Edition), organized by National Institute of Maritime Affairs on 15th November.

He emphasized the various stakeholders to not forsake the sector as the maritime geopolitical and strategic position of Pakistan, along with the country’s dependence on its maritime trade and resources is critical. Director NIMA Islamabad, Cdre (Retd) Bilal Abdul Nasir SI(M) apprised the audience about the organization’s contributions in raising maritime awareness as a premier maritime think tank of Pakistan.

The Keynote speaker Prof. Dr. Azhar Ahmed underlined the potential of traditional and contemporary social media in promoting maritime awareness. He commended the initiativeof the Economic Affairs magazine in collaborating with NIMA to highlight pertinent issues such as greener shipping and celebrating World Maritime Day by dedicating a special issue on the subject.

Ambassador Mrs. Naghmana Hashmi referred to sea blindness and lack of focus on maritime issues among the public as ‘central cataract’. The need for roadshows for awareness, maritime entrepreneurship, and the role of media was reiterated. She called for increased awareness throughout the nation about pertinent topics such as the IOR and CPEC, in liaison with other seafaring nations.

He emphasized the country’s vast dependence on imported petroleum and called for the need to provide terminal operators with essential technology and resources to transform their facilities that are in compliance with greener technology and a larger vision of UN Decade of Ocean Science for Sustainable Development. Mr. Ismail Mahmud, Chief Executive Officer, Engro Vopak &Elengy Terminals Ltd. delved into the necessity of modernizing the current practices and tools with digitalization and automation by presenting their facility as a model for efficient, sustainable, and economically viable maritime trade.