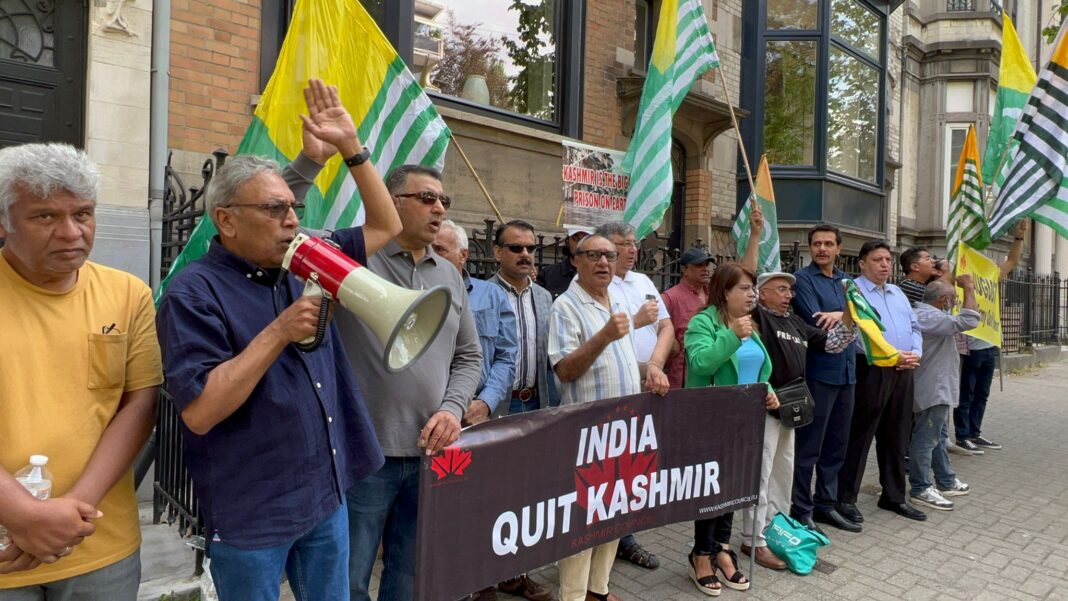 Brussels: Kashmiri Council Europe (KC-EU) organized a protest demonstration to mark the “Black Day” today, 15th August 2020 (Monday) in front of Indian Embassy in Brussels, the capital city of Belgium.
It is important to mention that Kashmiris on both sides of the Line of Control and across the world observe the Indian Independence Day as “Black Day’’ on Aug 15 every year.
It is three years ago, when Indian Modi regime revoked special status of Jammu and Kashmir and Indian Illegal occupied Kashmir (IIOK) is witnessed of severe violations of human rights since August 2019.
The protest gathering in Brussels was arranged by Kashmir Council Europe (KC-EU). Representatives of Jammu and Kashmir Liberation Front (JKLF), Kashmir Peace Forum, PPP and PTI were also present on the occasion. A large number of people from all walks of life including Kashmiris, Pakistanis and representatives of different organizations based in Belgium and other EU countries attended the demonstration. Participants of the protest gathering raised slogan against Indian occupation of Jammu and Kashmir and brutalities committed by the occupation forces in IIOK. They protested against anti-Kashmiris behavior of Indian authorities.
They called upon the Indian regime to immediately end military lockdown and release the Kashmiri political figures and activists with out any delay. It also asked the Prime Minister of India to fulfil the promise of his great predecessor Jahwaharial NEHRU to give a voice to the people of Jammu & Kashmir and to allow them to determine their own political future.

On the occasion, chairman Kashmir Council Europe (KC-EU) Mr Ali Raza Syed said, we gathered here against Indian atrocities on Kashmiris. Ali Raza Syed determined that the peaceful struggle for liberation of Kashmir would be continued.
Other speakers said, though rights under Indian rule was not real destination of the people of Jammu and Kashmir but the BJP-led Indian government attempted to repeal special status and to erase identity of people of Jammu and Kashmir by revoking Articles 370 and 35-A.
They called for immediate international attention on the existing situation in Indian illegal occupied Kashmir. They specially urged that UN Security Council to take its responsibility on the issue of Kashmir by taking serious action against Indian atrocities in occupied land. They called that right to self determination of the people of Jammu and Kashmir should be assured as soonest.

UNICEF and partners launched an expansion of the Child Nutrition Fund

NEW YORK : Governments, philanthropies, and private donors have pledged approximately US$577 million since July in response to the deepening child malnutrition crisis – with...
Read more