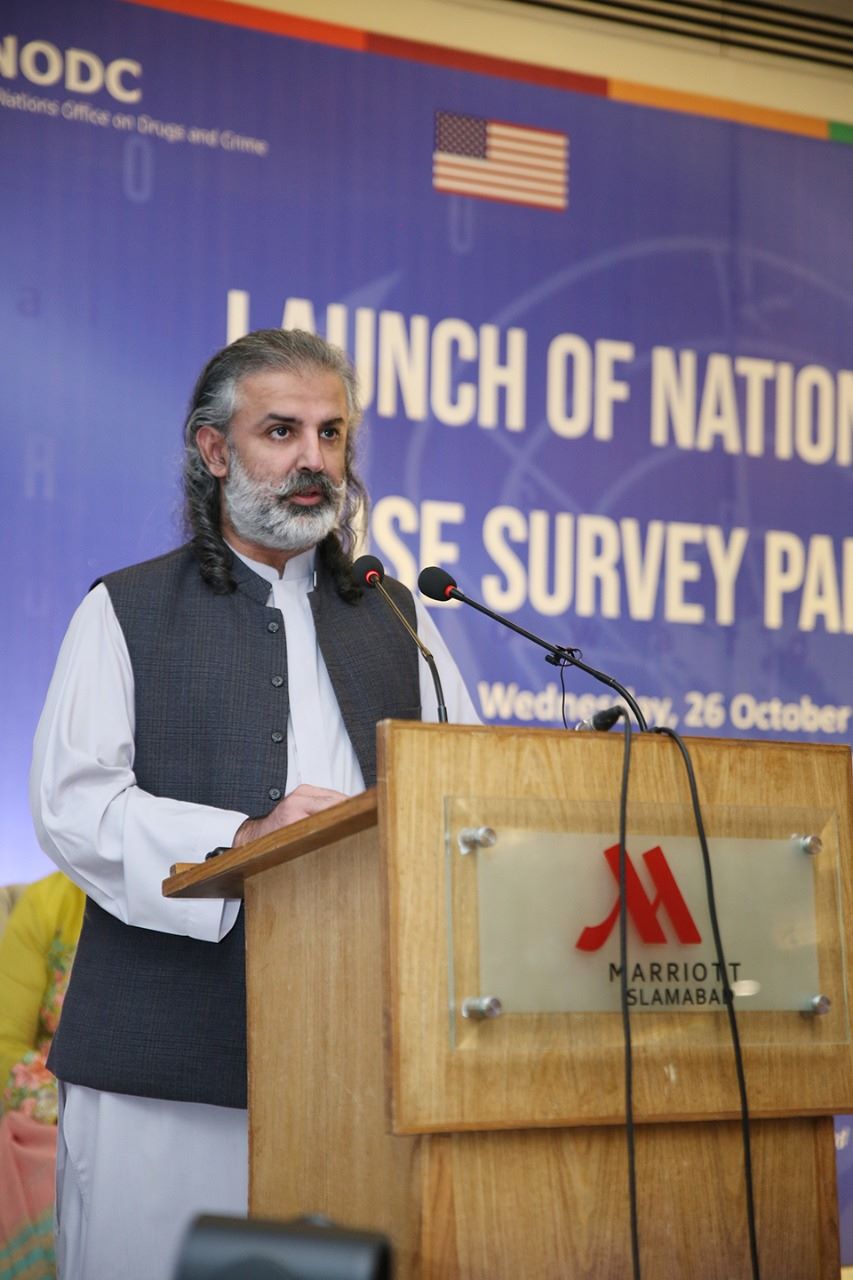 Islamabad – Today, the Ministry of Narcotics Control, Government of Pakistan, U.S. Department of State’s Bureau of International Narcotics and Law Enforcement Affairs (INL) and the United Nations Office on Drugs and Crime jointly launched the National Drug Use Survey Pakistan 2022-24 in Islamabad.

In 2012 and 2013, UNODC in collaboration with the Ministry of Narcotics Control, the U.S. Department of State’s Bureau of International Narcotics and Law Enforcement Affairs (INL), and other national stakeholders conducted a national survey on drug use to estimate the extent and patterns of drug use in Pakistan. The overall results of the survey revealed that approximately 6 percent of the population – 9 percent of the adult male population and 2.9 percent of the adult female population – equivalent to 6.7 million people – had used a substance other than alcohol and tobacco in the preceding year. 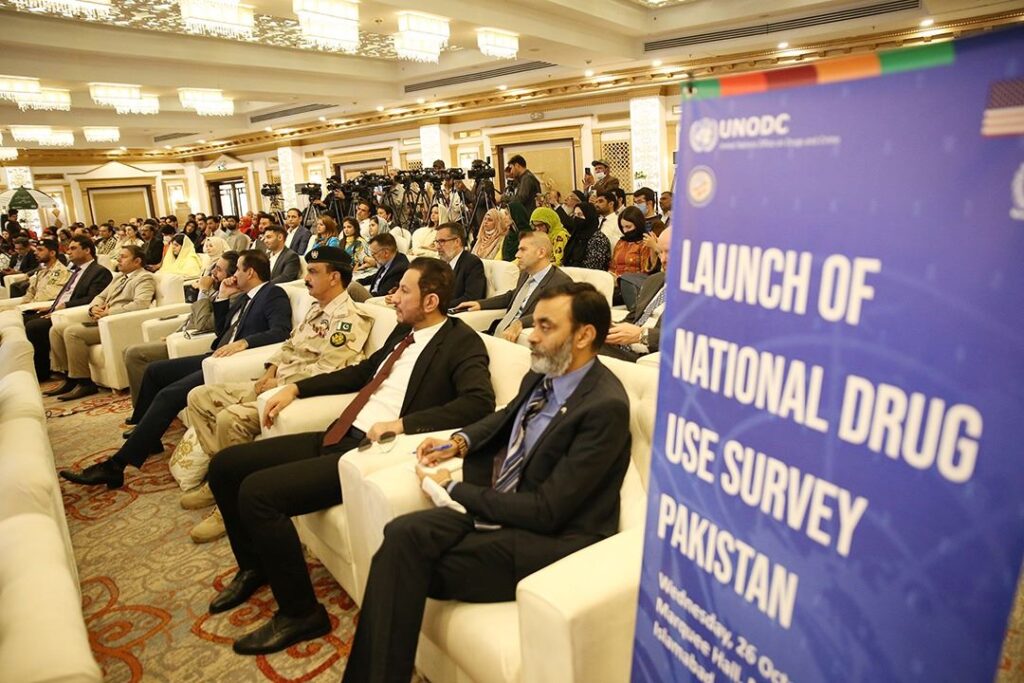 Since the previous survey, there have been changing trends of drug use in the region, especially anecdotal information of a rapid increase in the use of synthetic drugs such as methamphetamine. To have scientific data on the current situation of drug use in Pakistan, the national drug use survey 2022-24 will be conducted to provide reliable evidence of the extent to which the population is using drugs and suffering from drug use disorders. This survey will be comprised of a household survey and high-risk drug use study that will have national coverage, including the major districts in each province. This survey is being carried out jointly by the Ministry of Narcotics Control and UNODC with financial support from U.S. Department of State’s Bureau of International Narcotics and Law Enforcement Affairs.

Dr Jeremy Milsom Representative UNODC in his welcome remarks thanked Mr Nawabzada Shazain Bugti, Federal Minister for Narcotics Control, and his Ministry for their support in taking lead on the survey and U.S. Department of State’s Bureau of International Narcotics and Law Enforcement Affairs (INL) for their gracious financial support to conduct the national drug use survey and drug prevention and treatment interventions in the country, he also mentioned that the comprehensive data on drug use patterns and trends is key to developing effective prevention, treatment and rehabilitation programmes and the Survey report will serve to promote thoughtful discussions, inform policies and strengthen national cooperation.

Mr Andrew J. Schofer – Deputy Chief of Mission, U.S. Embassy Islamabad in his speech thanked the Federal Minister for Narcotics Control, UNODC, and other dignitaries for their partnership. DCM Schofer further stated that, “through this project, the U.S. Embassy’s International Narcotics and Law Enforcement Affairs (INL) will support the Government of Pakistan to provide evidence-based information to shed light on changing patterns of drug use and allow for stronger implementation of programs and refinement of policies. The launch of the survey is an important milestone in the availability of evidence-based information on drug use in Pakistan, filling an often-overlooked gap. The information and recommendations contained in the completed survey report will help to save lives by informing the development of drug prevention and treatment programs and suggesting needed policy or regulatory changes. The United States is proud to partner with the Government of Pakistan on drug demand reduction efforts. To date, INL has provided $24 million U.S. dollars – that’s 522 million Pakistani rupees – of support for drug treatment and prevention efforts in Pakistan. I am also pleased to share with you that this year we celebrate the 75-year anniversary of the partnership between the United States and Pakistan. The U.S. government, through INL, has invested more than $1 billion dollars over the last 40 years to improve citizen security and enhance law enforcement capacity across Pakistan.”

Ms Giovanna Campello Chief of prevention, treatment and rehabilitation section UNODC Vienna office in her speech thanked the Ministry of narcotics control, INL and the participants for showing their concern on the drug situation and importance of the national drug use survey in Pakistan, she talked about the importance of drug survey in understanding the on-ground drug situation, the gaps and challenges to address the drug prevention and treatment interventions. She also talked about the efforts that are being made in collaboration with the government of Pakistan in developing a mechanism to ensure quality drug treatment services and also scaling up the capacity of drug treatment professionals to deliver quality drug treatment services that are in line with the international standards for drug treatment.

Ms Humaira Ahmed Federal Secretary Ministry of Narcotics Control in her speech appreciated UNODC for their technical assistance in conducting the national drug use survey and U.S. Department of State’s Bureau of International Narcotics and Law Enforcement Affairs for their generous support for the national drug use survey and drug prevention and treatment interventions in the country.

The Federal Secretary in her speech mentioned that drug use problem has emerged as a serious threat to health and security of the people of Pakistan especially the youth with tendency towards drug use emerging even in educational institutions.
She emphasized that the drug problem requires a comprehensive multisectoral response from various departments/sectors to address the drug problem.

Mr Nawabzada Shazain Bugti, Federal Minister for Narcotics Control, in his closing remarks
thanked UNODC for the technical support and the U.S. Department of State’s Bureau of International Narcotics and Law Enforcement Affairs for the financial support to carry out the National Drug Use Survey.

The Federal Minister emphasized on the need for being strategic in the drug prevention and treatment approaches and hoped that this Survey will help by providing information to take stock of drug situation in the country and facilitate in chalking out strategies to effectively combat the challenges of drug abuse. He stressed upon the importance of cooperation across borders to counter the growing drug use problem and urged all stakeholders to remain steadfast in their efforts to achieve the goal for a ‘drug free’ nation.

The survey has been made possible with the kind support of U.S. Department of State’s Bureau of International Narcotics and Law Enforcement Affairs (INL).