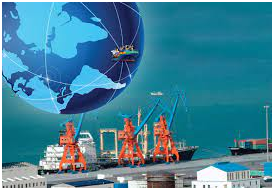 Eighty per cent of global trade by volume and 70 per cent by value are being carried out through sea and is increasing significantly; out of which Asian ports loaded and unloaded 41 per cent and 62 per cent respectively in 2020. Sea trade is not only preferred due to its flexibility but also being the cheapest mode of transportation.  Transportation through sea is 10, 45 and 163 times cheaper than rail, road and air respectively. In case of Pakistan 95 per cent of its trade is carried out through sea.  However despite its huge dependence on sea trade, possession of 1050 km long coast and 29, 0058 sq. km of Exclusive Economic Zone in Indian Ocean through which 70 per cent of global oil is tradedPakistan has not been able to pragmatically make use of these potentials to an advantageous and sustainable socio-economic scenario. Unfortunately it is significant to note that since 1971 Pakistan shipping fleet has reduced sharply from 71 to 11; ships out of which six are oil and five are bulk carriers; which transport only 5 percent of Pakistan’s trade worth 0.25 billion USD thus compelling Pakistan to spend 5 to6 billion USD of its valued foreign exchange as freight charges annually to foreign ships; who may increase the freight cost or may not be available during war or other crisis.  Hence it is imperative for Pakistan to not only to reduce this independence but also to enhance in Blue Economy for diplo-economic sustainability and strength in an emerging era of global interdependence. As Pakistanhas been blesseda long coast,five major rivers and world’s largest canal network hence all should also be integrated in Blue Economic Policy for atleast fishing, transportation and hydro power generation. Danube, Mekong, Morava, Maghna and Padma rivers are points incase. Like Bangladesh who transported 27.80 lac tons of cargo through inland waterways in financial year2019 to 2020, Pakistan can also make use of its 10,370 km long Inland water ways for transportation. As far as sea trade is concerned apart from increasing the ships there is a need to enhance port handling capacity from 37 to 217 milliontons per annum within five years by transforming Gwadar in to a SMART Automated port.  It is estimated that by 2050, 50 per cent of global oil and gas needs will be met through off shore resources, for which Pakistan needs to continuously enhance its of offshore exploration and drilling by partnering with countries like China, Germany, Iran, Russia and Turkey. Along with oil and gas other seabed resources like copper, zinc, nickel, gold, silver and phosphorus should also be explored. Despite having five large rivers, world’s largest canal network and Exclusive Economic Zone Pakistan’s fishing export is only worth 451 million USD out 270 billion USD of global fishing trade. Regrettably despite being blessed with 1050 km long coast with diversity of flora and fauna, share of Pakistan in coastal tourism was only worth 50, 000 USD as compare to global share of 2.9 trillion USD in year 2020. Although the capacity of Pakistan shipbuilding industry is improving with the help of Pakistan Navy however on the contrary ship breaking industry is diminishing; in 1980 Gadani Ship Breaking Yard was the largest facility in the world with 30,000 employees however since 2020 it has come down to third place with 6, 000 employees after Indian Alang and Bangladeshi Chittagong ship breaking yards.  Apart from improving the above mention facets, now that once Pakistan is part Belt Road Imitative it should also concentrate for earliest development of Gwadar Shipyard which is located at mouth of hydrocarbon rich Persian gulf through which Ultra Large Crude Carriers and Large Container Carries pass hence provision of an advance and a contemporary repair facility at Gwadar Shipyard will not only be economically beneficial for Pakistan but will also add stake of global shipping companies in Gwadar. In order to make the Blue Economy more pragmatic and to complete the trade cycle it will be vital to prioritise the development of Special Economic Zones closer to ports and to establish Gomthal Midway Transit Transshipment Hub 20 km north of Gilgit from where containers and other load brought from south will be shifted to transport from other countries. Moreover there is also a need to evolve an integrated policy for sustainable Blue Economy by strengthening the concept of public private partnership.  (Astola Island)Astola Island which is a small uninhabited 6.7 km long Pakistani island in the Arabian Sea approximately 39 km southeast of the fishing port of Pasni should also be developed as a logistic base for Navy and Marchant ships including foreign vessels and should also serve as a naval intelligence and defence out post. This will also secure the most critical sea line of communication emerging out of hydrocarbon rich Strait of Hurmuz leading to Pacific Ocean through Strait of Malacca and Atlantic Ocean through Suez Canal.   Writer is Ph.D; International Relations and Fellow Research Member with Chartered Institute of Logistics and Transportation (UK) & Pakistan Navy War College