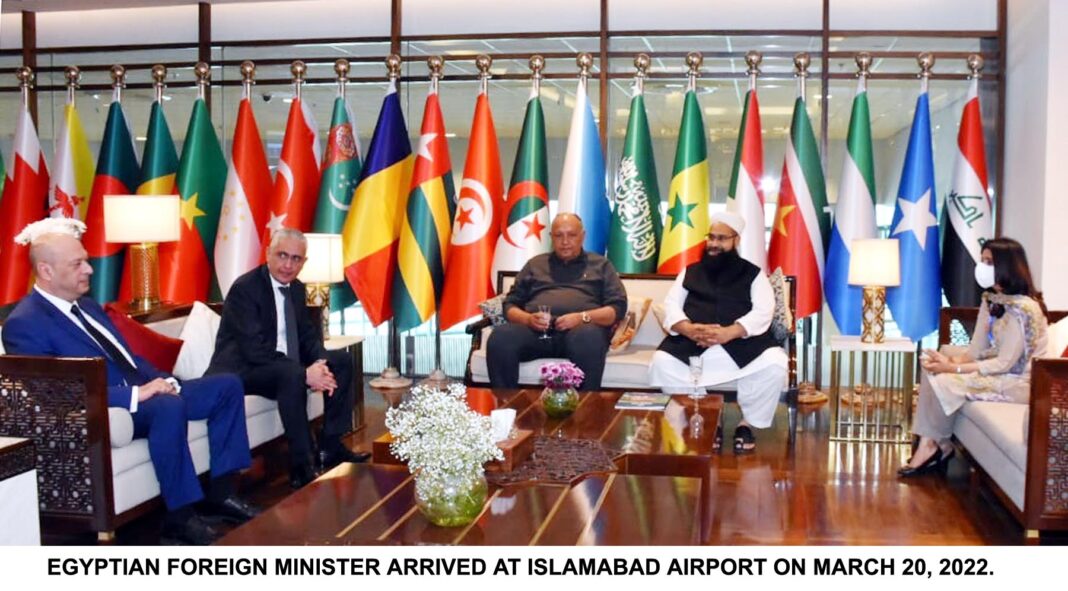 The two Foreign Ministers held in-depth consultations, exchanging views and perspectives on a wide range of bilateral, regional and international issues. Both sides expressed satisfaction at the excellent state of bilateral relations and close cooperation at various regional and multilateral fora. Underscoring Pakistan’sshared bonds of common faith, cultural affinity and historically warm ties with Egypt, the Foreign Minister reaffirmed the desire to further deepen the multi-dimensional relationship between the two countries.

The two Foreign Ministers agreed to enhance high-level exchanges and to strengthen institutional engagement for adding further momentum to close collaboration on all issues of mutual interest.

The Foreign Minister apprised his counterpart of the ongoing human rights violations and illegal demographic changes in Indian Illegally Occupied Jammu and Kashmir (IIOJK). He also briefed Foreign Minister Shoukry on the recent so-called “accidental” firing of a missile by India into Pakistan’s territory. He stressed that, in addition to highlighting disturbing questions about the multiple shortcomings and technical lapses of serious nature in India’s management of strategic weapons, the lack of communication and explanation from India’s side was a source of serious concern. Noting that the incident was consistent with India’s irresponsible conduct and needed to be addressed by the international community, the Foreign Minister underscored Pakistan’s demand for a joint probe into the incident.

The two Foreign Ministers had a detailed exchange ondevelopments relating to Afghanistan. Foreign Minister Qureshi emphasized the need for urgent measures to avert humanitarian and economic crises in Afghanistan. He drew attention to the improvement in the security situation and stressed the importance of constructive engagement by the international community to help promote the objectives of durable peace and stability of Afghanistan as well as prosperity of the Afghan people.

The two Foreign Ministers shared perspectives on the situation in Ukraine. Foreign Minister Qureshi highlighted Pakistan’s principled position and consistent calls for a peaceful settlement through dialogue and diplomacy. He stressed the inviolability of the principles of the UN Charter. The two Foreign Ministers also exchanged views on the economic impact on the world at large and the unintended consequences for the developing countries arising from the ongoing conflict, particularly in the shape of rising oil and food commodity prices.

In the context of the 27th Conference of Parties (CoP) of UN Framework Convention on Climate Change, scheduled to be held in Sharm-el-Sheikh, Egypt, later this year, the two Foreign Ministers discussed priority actions for tackling Climate Change particularly the need for channelling enhanced climate finance for developing countries. Foreign Minister Qureshi assured Pakistan’s support to the Egyptian Presidency of CoP-27 for a successful Conference.