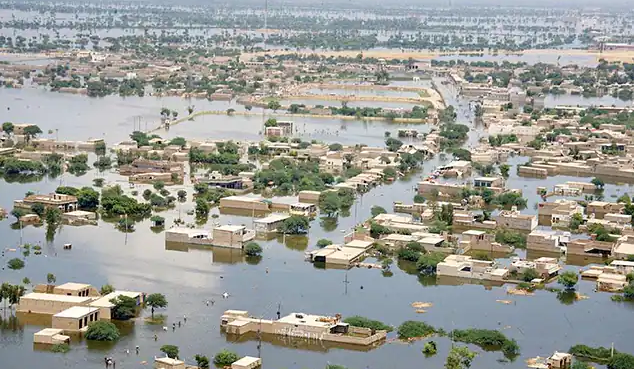 Political stability in a country guarantees socio-economic development, thus its importance is significant to catch the growth momentum. A politically chaotic situation crafts social unrest, economic downgrading, and overall uncertainty to limit the evolution process. Pakistan, unfortunately, is a classic example of a politically wobbling state.

Amid the current politically volatile situation, the flood is devastating a larger part of the country. The unpredicted rains in Balochistan, Sindh, Southern Punjab, and KPK caused the country’s worst-ever flood where hundreds of people lost their lives along with a massive loss of houses, crops, and cattle. The visuals surfaced through national and social media are very disturbing and witnessed the miseries of life in flood-hit areas.

Post-flood rehabilitation situation is very challenging for federal and provincial governments in Pakistan. Without global support, it’s like day-dreaming to bring back life to normal in these affected areas. International support especially from the platform of the United Nations (UN) can make a real difference to accomplish rehabilitation tasks.

Recently, United National Secretary General, António Guterres visited several flood-hit areas in Pakistan and termed it an “unimaginable devastation”. Through his message to the world, he urged ‘massive’ global support, and tougher action on climate change to save the world from the situation that emerged in Pakistan after the historic flood. Mr. Guterres was briefed on the latest developments about flooding in the country by Prime Minister Shehbaz Sharif and Foreign Minister Bilawal Bhutto Zardari. Talking at a press conference in Pakistan he said, “My heart goes out to everyone who has lost loved ones in this tragedy, and all those who have been affected by the loss of their homes, their businesses, and their livelihoods”.

Neighboring and friend countries like China, Turkey, Saudi Arabia, USA, Iran, Qatar, UAE, United Kingdom have sent aid to Pakistan as a gesture of solidarity with the people affected badly by floods in different parts of the country.  According to media reports, the flood affected more than 33 million people, causing widespread destruction and about 1400 plus people died as well.  Planning Minister, Ahsan Iqbal said around 45% of the country’s agricultural land had been destroyed in the floods and this would trigger another challenge in coming months due to destruction of crops.

National Disaster Management Authority (NDMA), private non-governmental organizations (NGOs), and local welfare trusts are working in various flood-hit areas to provide food and shelter to people who have lost their homes. Large-scale rescue operations were carried out to save precious lives but the gravity of the flood restricted rescue and relief operations mainly in Sindh and KPK provinces. Water is everywhere in affected areas and people are compelled to live in roadside tents. Weather conditions are challenging for them, especially for women and kids who are caught by diseases due to poor health conditions and the non-availability of food and medicines.

The recent floods have jolted infrastructure at a large scale and rehabilitation would take months to restore life in affected areas. In a short time, winter is starting in Pakistan, and in case these people stay under the open sky, the volume of miseries would be multiplied. This alarming situation demands from Pakistani nations, international communities, and world organizations to remain alert and helpful in this massive human catastrophe.

Obviously, this is a challenging situation for a country like Pakistan where life is already teetering for common people. The ever-growing inflation trend hits over 48% prices hike, high rates of POL products, rupee devaluation, increasing power tariffs, and whatnot have been added to the glooms of poor people in Pakistan in recent years.

After 2018 general elections, the PTI-led coalition government was formed and constantly criticized for inadequate economic policies and performance. The opposition parties, who are part of the incumbent government, were mocking the PTI government for not being able to give economic relief to poor people. This is an established dilemma that Pakistani politicians feel the pain of common people when they are in opposition and their viewpoints, statics, logics turn in the government’s favor when they get command to rule the nation.

The PTI government was ousted through a vote of no confidence by the opposition parties in early April this year. Chairman PTI, Imran Ahmed Khan Niazi initially tied the siege of his government with an international conspiracy. Later, he blamed the Pakistani establishment for forming an opposition alliance against his government and due to his ever-changing stance, the nation might get another theory in coming days. Since the end of his government, Imran Khan is teaching the lesson of ‘Real-Freedom’ to the Pakistani nation along with countless blessings that the public was enjoying during his tenure. In almost four years of his government, he only sang the song of Sharifs and Zardari’s corruption instead of taking the cases to a logical end filed against them. Now, as an opponent of the government, he is feeling the pain of poor countrymen due to the high inflation rate and prices hike.

On the other hand, political parties enjoying the lust of power in the current government are cursing the PTI government for all economic crises. They were economic gurus while sitting on opposition benches and shared hundreds of plans to revive Pakistan’s economy. After forming the government in April 2022, their expertise vanished and they have nothing to do for real except selling the fabricated theories of ‘financial hardships’.

Natural calamities are unfortunate in any country and brave nations face such challenges with their character and resolve. They put aside their internal differences and show unity to overcome the challenges. Contrary to this much-needed unity in this challenging situation due to the biggest human tragedy in Pakistan as a result of historic floods, our politicians including all parties are trying to prove their genuineness and swearing to opponents. They are staging political rallies for votes, cursing opponents, blaming each other for frauds and embezzlements in aid distribution, and halting the followers not to give aid to their opponents. These sleazy moves of political parties are alarming and witnessed the poor quality of political maturity in Pakistan.

Political cases are priorities of our judicial system, the establishment is involved to fetch new obedient for the next term, top military leaders are weaving their future, bureaucrats are turned into observing mode and politicians are grabbing each other’s collars. Nothing is left behind to add more to the difficulties of the Pakistani nation. On top of all these ailments, the flood has seized life and put the people in a miserable situation leading to chronic instability.

Despite all odds, it’s the national responsibility of everyone to help the people passing through a troubling situation. At the same time, people should record the character of so-called political leaders and power elites in their memories who in the hunt for power are always ready and available but in a really challenging situation are indulged in melodramas.