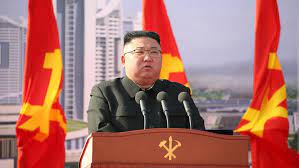 Pyongyang — A spokesperson for the DPRK Foreign Ministry Saturday gave the following answer to a question put by KCNA as regards the fact that the U.S. and its vassal forces openly revealed their hostility towards the DPRK during the recent NATO summit:

During the recent NATO summit, the chief executives of the U.S., Japan and south Korea put their heads together for confrontation with the DPRK and discussed the dangerous joint military countermeasures against it including the launch of tripartite joint military exercises, taking issue with its legitimate exercise of the right to self-defense for no ground.

The U.S. and its vassal forces inserted a hostile expression of finding fault with the DPRK’s measure for bolstering its military capability for self-defense in a new “strategic concept” adopted at the NATO summit.

Such anti-DPRK row of the hostile forces synchronizes with the start of the RIMPAC joint military exercises, the U.S.-led multinational naval combined exercises, and south Korea’s military lunacy to destroy peace and stability in the Korean peninsula as well as the Asia-Pacific region through the largest-ever scale dispatch of its naval force.

The recent NATO summit more clearly proves that the U.S. pursues a plan to contain Russia and China at the same time by realizing the “militarization” of Europe and forming a military alliance like NATO in the Asia-Pacific region and keeps the U.S.-Japan-south Korea tripartite military alliance as an important means for materializing the plan.

Owing to the reckless military moves of the U.S. and its vassal forces, dangerous situation, in which a nuclear war might break out simultaneously in Europe and the Asia-Pacific region, has been created and the world peace and security came to be placed in the most critical condition after the end of the Cold War.

The reality clearly shows that the real purpose of the U.S. spreading the rumor about “threat from north Korea” is to provide an excuse for attaining military supremacy over the Asia-Pacific region including the Korean Peninsula, and furthermore, the rest of the world.

The prevailing situation more urgently calls for building up the country’s defences to actively cope with the rapid aggravation of the security environment of the Korean Peninsula and the rest of the world.

The DPRK will reliably defend the sovereignty and interests of the country and its territory from all sorts of threats caused by the hostile acts of the U.S. and its vassal forces and fulfill its responsible duty to ensure peace and security ln the Korean Peninsula and the region.