Climate Change and Floods in Pakistan 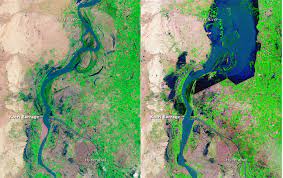 Pakistan along with other South-Asian states is struggling against a non-traditional security threat that is climate change.Pakistan has been ranked in the top ten countries most affected by climate change in the past 20 years.The reason behind this include the impact of back-to-back floods since 2010. Climate changeis one of the most unavoidable issues of our time, that is affecting the sea level and causing the intrusion of seawater into the Indus Delta. Thisrising sea level paves way for floods and ruin the productivity of agricultural land.Pakistan has become a major subject to disastrous floods mainly caused in Balochistan, Sindh, and southern Punjab due to highly excessive climate-change. Balochistan and Sindh received rainfall more than five times as compared to the average rainfall recorded. This depicts that climate change is a real existing threat. So, it is not wrong to say that global warming induced by man-made activities also provoked an intensification of the current situation. Due to this, the concentration of carbon dioxide in our atmosphere is reaching dangerous levels, driving Earth’s temperatures higher and amplifying the frequency and intensity of extreme events.

So far, due to this calamity around 33 million people suffered as their homeland drowned in flood water, making the rural areas uninhabitable and people were forced to immigrate to the federal and surrounding areas. The urban flood has caused more devastation because of poor drainage and improper infrastructure. Due to scarcity of resources, there is less availability of clean water to drink and food to eat for the flood victims. Hence, the country which was still in a recovery phase from Covid-19 is now facing serious health issues due to the flood causing serious medical issues like diarrhea, malaria, dengue fever, and infectious skin diseases. These devastating floods caused the vast amount of standing water, which provides the perfect breeding conditions for Aedes mosquitoes to spread the dengue virus.In addition, majority of people are living out in the open with their families with no drinking water, no food and no livelihood. As floods have destroyed and damaged the infrastructure, including thousands of schools, water systems and health facilities. Moreover, the flood-hit areas faced many casualties, massive destruction of property and loss of life.

Agriculture has the potential to play a great role in advancing Pakistan’s economy but the floodshave hit agricultural lands hard, making them less fertile to cultivate major crops for the coming year.This means a huge number of cultivators will be late for the sowing season. In addition,the economy of Pakistan has been affected severely by widespread destruction brought by extreme floodingwhich have negatively impacted crops, slowed down the economic growthand increased inflation. Pakistan’s economy is facing many crises and the country will fail to progress unless significant action is taken. The set back of the Covid pandemic and the floods have left the economy reeling and our government pleading for foreign aid.However, this is only a short-term fix, the government needs to have a serious look at policies that can generate rapid growth. Pakistan is facing the dark days of its history in the episode of the greatest flood of the century.

The damage caused by the catastrophic floods was exacerbated due to the volatile political condition unfolding in the country.While 1/3 of the country was drowning in flood water – political leaders took this disaster as an opportunity to push their narrative while deflecting blame and portraying local governments and political parties as ineffective. The catastrophes like flood or climate change become an opportunity for political leaders to promote their own parties’ agendas and narratives rather than a serious threat to traditional or human security. Moreover, people on social media were more focused on directing their anger towards political parties for not responding effectively to the situation.

Last but not the least, people from all over the world expressed sympathies to flood victims and condoled the loss of lives in the tragedy.Pakistan should implement the climate change policy which is divided into two parts.  The first step is to seek funds from international organizations and first-world countries to address such environmental threats. The second step is to encourage the private and public sectors to invest by creating economic incentives for improved control and management in wake of such disasters. Furthermore, by educating citizens about what is climate change and how to maintain our ecosystem. The situation in Pakistan has deteriorated significantly due to governmental issues such as the inability of state departments and organizations to develop an effective flood warning plan beforehand.