Since the launch of the BRI in 2013, 136 countries and 30 international organisations have signed BRI cooperation documents, received US$90 billion in Chinese Foreign Direct Investment (FDI) and exchanged US$6 trillion in trade with China. President Xi Jinping has described the BRI as the ‘Project of the Century’. However a few of the social movements, affected communities and non-governmental organisations have criticized BRI projects for harmful environmental, social and economic impacts, and resisted their implementation. China’s expansive connectivity vision, the Belt and Road Initiative, aimed to connect countries around the globe. There were plans for pipelines and a port in Pakistan, bridges in Bangladesh and railways to Russia – all with the aim of creating what China calls a “modern Silk Road” trading route to kick start a new era of globalization. The China-Indochina Peninsula Corridor is one of six corridors of BRI which is expanding in Far East and even beyond towards Pacific Island Countries. A few of the BRI projects in South Pacific are mentioned in succeeding paragraphs. 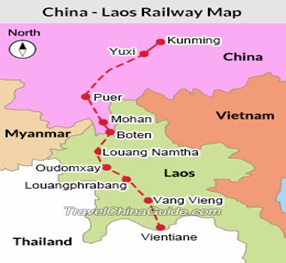 China and Laos have inaugurated a high-speed railway on 3rd December 2021. The 414-km long track from Boten, on the China border, all the way down to Vientiane, on the Thai border have cut down 18 hours journey to just 3 hours. The USD 6 billion railway is another part of China’s expansive Belt and Road Initiative, a series of mostly Chinese-financed infrastructure projects around the world receiving direct investment and loans. In keeping with the initiative’s aim of promoting connectivity, the China-Laos railway will also connect south to lines in Thailand, Malaysia and Singapore. The Laos government hopes the passenger and freight railway will boost tourism and trade and bring prosperity to its seven million citizens. Given the country’s mountainous geography, the railway was a mighty engineering challenge as only 38% of it runs over plans, with the rest crossing 170 bridges and passing through 72 tunnels. A special economic zone has been established at Vientiane. Project cost has been met by the Laos China Railway Company, owned 30% by Laos and 70% by China. Laos is committed to paying USD 720 million of its share in the next five years, with USD 250 million coming out of the national budget and USD 470 million being borrowed from the Exim Bank of China (at 2.3% interest “Once completed, the railway will benefit Laotians of all ethnic groups, facilitate and reduce costs of transportation, and stimulate the development of agricultural and industrial sectors, tourism, investment and trade” Laos’ Minister of Public Works and Transport.  Earlier Laos only had a about 3.5 km narrow-gauge railway, which could not meet the demand of rail passengers and the development of the local economy. However new high speed railway has not only greatly improving Lao’s transportation, boosting the tourism industry, and creating more jobs for the locals but has also made travel between the two countries cheaper as compared with the expensive air-flight and time-consuming coach. The project has attracted influx of cash is reviving Boten, where the high-speed railway crosses from China into Laos. Construction has begun on four-star hotels, casinos, shops, a golf course and other entertainment venues to attract wealthy Chinese tourists. 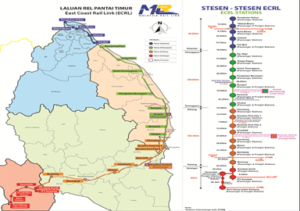 The ECRL is a key railway project under China’s flagship Belt and Road initiative which will soon be connecting the eastern coast of Malaysia with the western part of the country. The construction works of 665km ECRL was suspended in 2018 for a few months due to high associated costs; however later construction resumed after the Malaysian Government subsequently signed new agreements, which substantially scaled back the project and reduced the cost by one-third to $10.63bn. The Malaysian unit of China Communications Construction is building the project and is accepted to be to be completed by end of 2026. Once complete, Malaysia Rail Link will operate the project as joint venture with CCCC. Malaysian Transport Minister said that the changes increased ‘the viability of the ECRL project and will provide further economic, environmental, and social benefits’. According to the ministry, around 21.4% of the project was completed by last month. The ECRL is said to be the biggest economic and trade project between China and Malaysia. According to a Reuters report, the project cost was revised to $12.08bn from the previously decided $10.63bn. The railway network covers most of the 11 states in Peninsular Malaysia. In East Malaysia, only the state of Sabah has railways. The network is also connected to the Thai railway in the north. If the Burma Railway is rebuilt, services to Myanmar, India, and China could be initiated. Malaysia has reportedly accepted a nearly 14% increase in the estimated construction cost for the East Coast Rail Link (ECRL) project. Beijing has taken many initiatives for social development in Far East region and Pacific Island Countries:

Chinese investment in infrastructural development projects for social development of Far Eastern Countries and Pacific Island Countries will have various implications out of which a few are appended below: