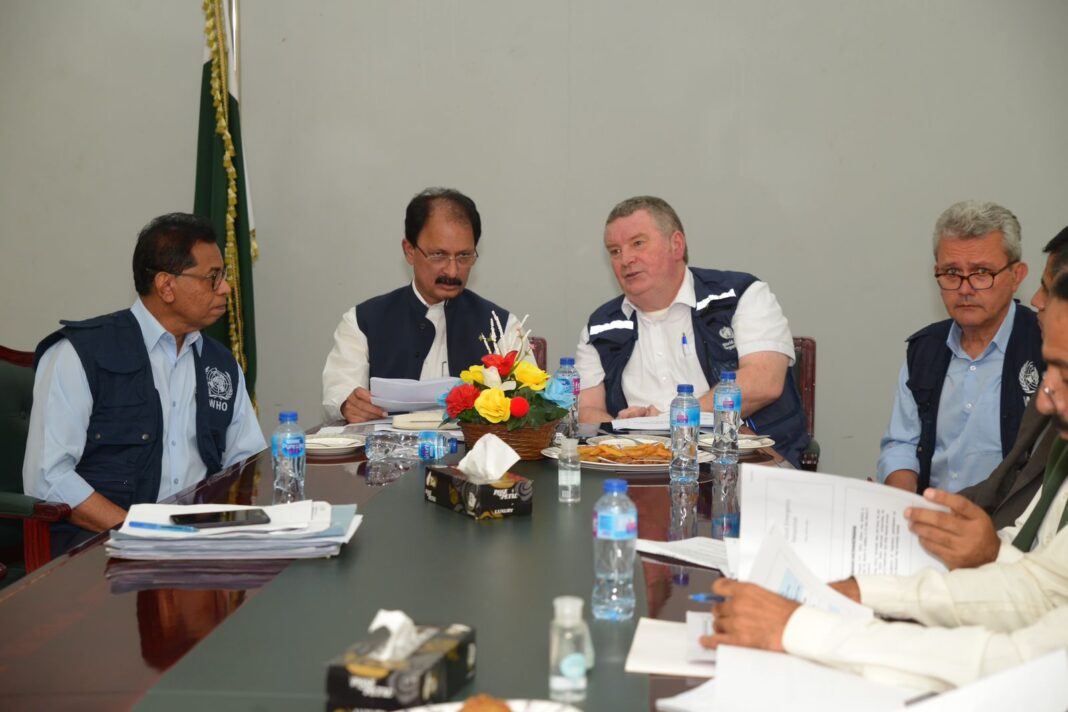 Sukkur, September 28, 2022 – During a field visit to Sukkur division in Sindh province, Executive Director of Health Emergencies Programme, World Health Organization Dr. Mike Ryan highlighted that WHO will provide additional support to Sindh and Baluchistan to support the government’s effort to provide emergency health services to the stranded population.
He said this while talking to Commissioner Sukkur Ghulam Mustafa Phul at his office while attending a briefing on recovery operations in Sukkur division.

Dr Mike Ryan, who is on an emergency visit to Pakistan, arrived in Sukkur to visit and see the flooded areas and ascertain issues in the emergency rehabilitation of the flooded population. He said the catastrophe is so massive that the international organization and community had to act fast. He compared the 2010 floods and said that this is a climatic catastrophe and we need to act fast. Dr Mike Ryan said that the WHO will provide more medicines and health kits for pregnant women to curtail malaria and water-borne diseases.

Commissioner Sukkur Division Ghulam Mustafa while briefing the WHO delegation, said that in Sukkur Division overall, 2.56 million individuals were directly affected by floods, losing their homes and crops. However, water is still standing in the fields and many villages and union councils, stranded in water where the government machinery has been unable to reach. He said that the Provincial Disaster Management Authority (PDMA) is coordinating the relief effort while deputy commissioners are focal persons for the emergency relief and recovery operations. He welcomed the WHO delegation and requested immediate supplies of medicines, health facilities, and defogging machine to avert spread of malaria and dengue and to cater to pregnant women.
WHO Country Representative Dr Palitha Mahipala, said that the WHO is establishing a Sukkur Hub to support government efforts in the relief and recovery operations in the Sindh province. The hub will be a center for all coordinated efforts in providing health facilities and will also work as a nerve center with partner UN agencies and NGOs.

The meeting was informed that 1.65 million people in Sukkur, Khirpur and Ghotki are displaced while 94 health facilities in the area have been damaged. The meeting was informed that a total of 517 IDP camps have been established where 289580 persons being accommodated in the IDP camps. DHO Sukkur informed that malaria, diarrhea, water-borne diseases and skin disease is on rise. Malnutrition in children due to extreme poverty and pregnant women are big concern for the health service providers as damage assessment has not been completed due to many areas still inaccessible and underwater.

The meeting was attended by all the district health officers of Sukkur, Khairpur, and Ghotki while officials from PDMA, district administrations, and Pakistan Army.
The WHO delegation also inaugurated the Sukkur Hub (Emergency Operations Center) and visited the Sukkur Labor Colony Medical facility for the flood affectees.
Dr Mike Ryan enquired about the health facilities being provided to the people and showed satisfaction with the services.
The delegation also visited Naseerabad district in Baluchistan.