We believe in a clean & green Pakistan :Chairman CDA 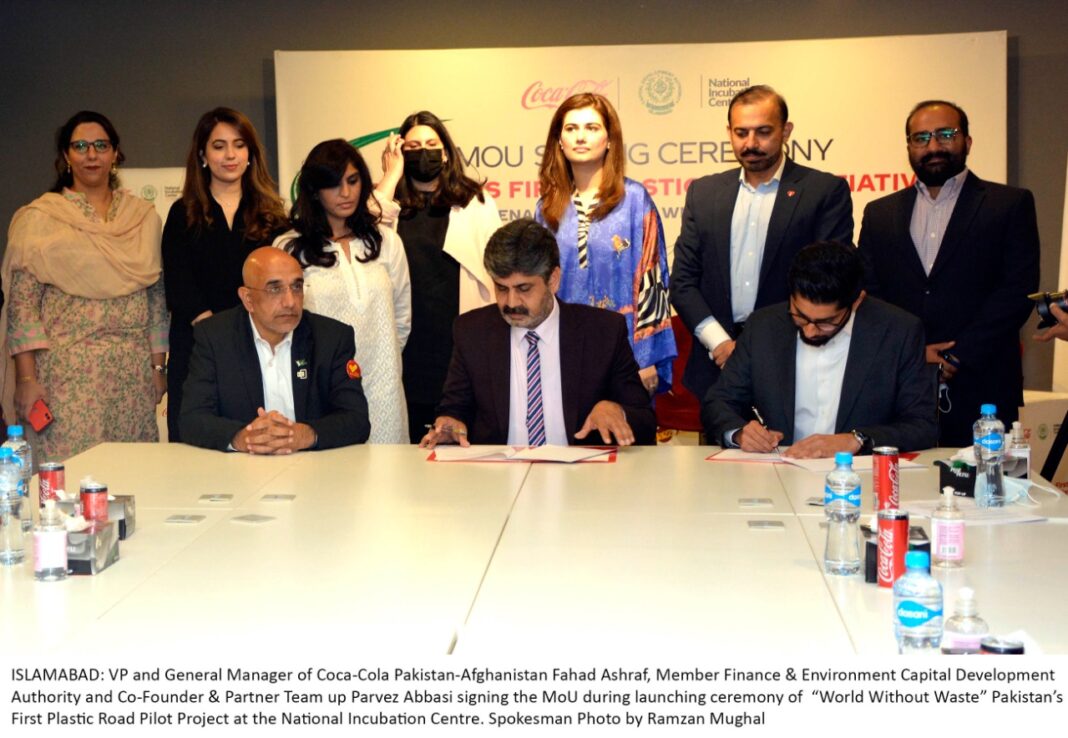 ISLAMABAD: Coca-Cola Pakistan and Afghanistan stan has partnered with Capital Development Authority and TeamUp / National Incubation Center (NIC) to work towards creating a World without Waste. This partnership was finalized today in an MOU signing ceremony held at the TeamUp / NIC offices in Islamabad. In attend- ance were environmental experts and govern- ment officials who discussed and debated the project in a panel discussion that followed the signing.

The Chairman Capital Development Authori- ty (CDA) Amer Ali Ahmed was the Chief Guest at the event and an instrumental partner in making the project a reality. “We believe in a clean and green Pakistan, but we also believe in working with each other to create results expansively” he said.

On the occasion Fahad Ashraf, VP and Gener- al Manager of Coca-Cola Pakistan-Afghanistan said, “This idea provides a break through solution to bring back plastic waste into the productive economy. And we also want to focus on build- ing a community around the idea and the inno- vation itself. For any concept to be applied and adopted, the people must first believe in it. And it needs to make social and commercial sense.” This is where TeamUp and NIC come in. Working towards expanding the idea nationwide via hackathons, conferences, white papers, policy changes, and a coalition of partners, TeamUp/ NIC hope to make this a success. Parvez Abbasi and Zouhair Khaliq representing the strategic leadership of the TeamUp/NIC added, “When Coca-Cola came to us with the willingness to be part of the solution, we were keen to lead this because most of the startups and projects here are guided by the Sustainable Develop- ment Goals”. This mega-project involves locally introducing the concept of re-carpeting national roads with plastic waste. For now, a one kilometre road in the Islamabad Capital will be modelled as a proof-of- concept. This project by Coca-Cola Pakistan has adopted the process of sustainable innovation whereby the scale is large almost 8 tonnes of recycled plastic is used only to re-carpet a one kilometre patch of road. The technology, the research and its application are Pakistani. Furthermore, this project allows the use of recycled PET waste to be part of a circular plastic economy and have a consid- erably positive impact on the environment. The roads re-carpeted with plastic last almost twice as long and are 51 percent stronger.

At the launch event of Plastic Road Pilot Re-Carpeting, a technical paper revealed the secondary research and global best practices, which will be adapted locally in the Pakistani context and invites anyone to adopt plastic waste in strengthening road structures anywhere.

Once adopted widely, this initiative is expect- ed to save the government valuable taxpayer money in repairs cost. Whereas this new tech- nology is practiced globally in countries across the world and even in South Asia, this is the first time Pakistan is adopting it under a public-pri- vate partnership.

Islamabad: The Millennium Universal College (TMUC),Islamabad formalizes Student Council 2021-2022 in an effort to regularizing the student body representatives and to encourage Millennials to...
Read more