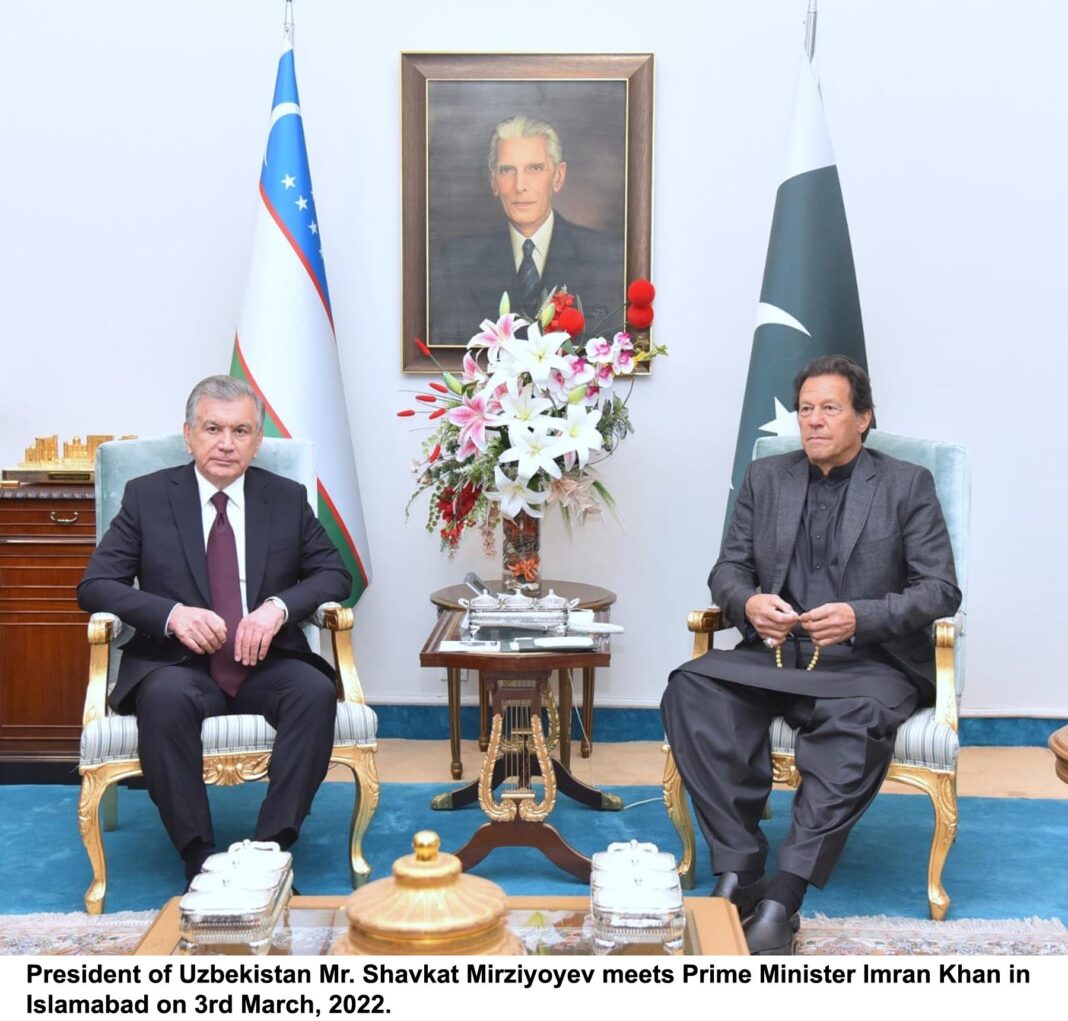 Upon the invitation of Prime Minister Imran Khan, President of Uzbekistan Shavkat Mirziyoyev arrived in Islamabad on Thursday on a two-day maiden visit.

The Leaders of the two countries held comprehensive consultations and considered all aspects of bilateral relations, paying special attention to the development of cooperation in the trade and economic sphere, science and technology, culture, education, security and defense and regional connectivity.

Emphasizing the centuries-old historical, religious, cultural and scientific ties between the two peoples and based on previously reached agreements, the parties agreed to further deepen and expand strategic partnership in all areas and in this context, decided to conclude a treaty on strategic partnership. 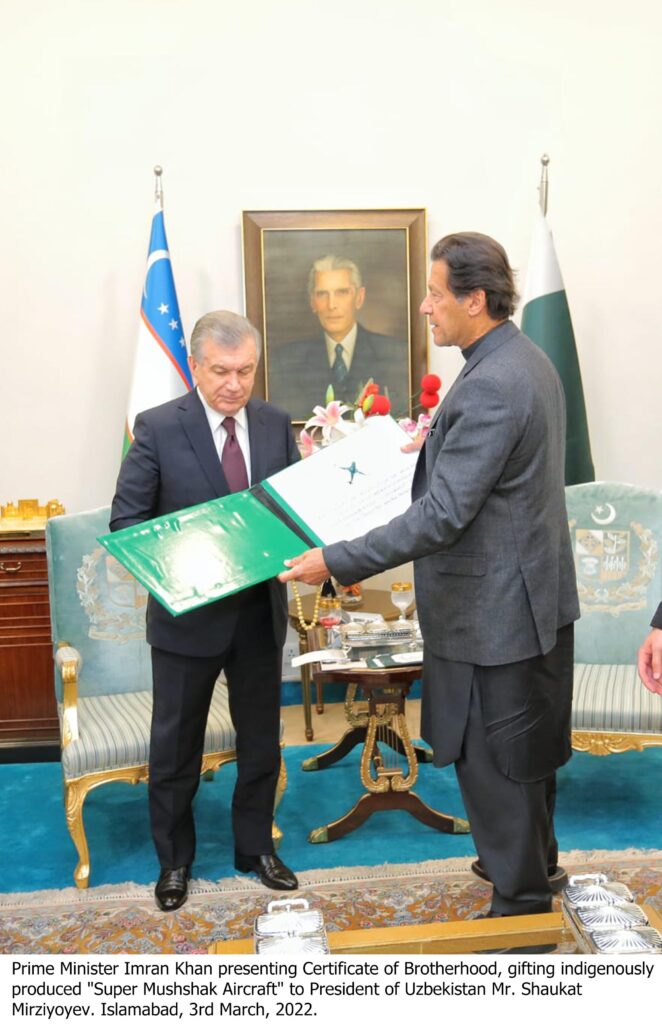 The two Leaders reaffirmed their commitment to close interaction based on common positions and to continue the practice of mutual support at international and regional forums on all issues of mutual interest.

The President of the Republic of Uzbekistan Shavkat Mirziyoyev expressed the readiness to provide support to Pakistan’s initiative to create a poverty alleviation mechanism during the period of Uzbekistan’s chairmanship in the SCO.

Welcoming the 30th anniversary of the establishment of bilateral diplomatic relations, the two Leaders agreed to celebrate this milestone in a befitting manner by organizing joint activities.

President Shavkat Mirziyoyev shared his vision on the “New Uzbekistan” strategy and stated that the reform process is aimed at the socio-economic interests of the people of Uzbekistan and the region as a whole. The Strategy lays emphasis on strengthening economic diplomacy and sets tasks to bring existing relations with South Asia, in particular with Pakistan, to a new level of strategic partnership.

Highlighting the achievements in the socio-economic sphere, Prime Minister Imran Khan outlined his vision of the “Naya Pakistan” centered on social justice and economic security. He said that Pakistan’s main emphasis has shifted from geo-politics to geo-economics. The Prime Minister shared details about the “Ehsaas” program aimed at reducing poverty and underscored that Pakistan’s “Qaumi Sehat Card” (National Health Card) program is the first initiative in the field of medical micro-insurance for the citizens of Pakistan.

The two leaders stressed the importance of developing institutionalized cooperation between the two countries within the five main pillars of Pakistan’s “Vision Central Asia ” political and diplomatic, trade and investment, energy and connectivity, security and defense and people-to-people relations.

Noting with satisfaction the intensification of the exchange of high-level visits between the two countries, the Leaders warmly recalled the positive agreements in the areas of trade and investment, customs, military education, culture and tourism, as well as visa facilitation for representatives of business community and tourist groups, reached within the framework of official visit of Prime Minister Imran Khan to the Republic of Uzbekistan on July 15-16, 2021.

The leaders noted with satisfaction that over the past five years, bilateral trade has increased fivefold, and despite the pandemic, it grew by another 50 percent last year.

The two Leaders welcomed the signing of the Preferential Trade Agreement between Uzbekistan and Pakistan and the entry into force of the Transit Trade Agreement. These agreements are the sign of the beginning of a new era in bilateral trade relations and will serve to increase mutual trade by utilizing existing opportunities.

The Leaders welcomed the convening of the 7th session of the Uzbek-Pakistan Intergovernmental Commission on Trade, Economic and Scientific and Technical Cooperation, 2nd round of Bilateral Political Consultations, the Joint Business Forum and the 4th meeting of the Business Council, held on February 28 March 2, 2022.They welcomed the understanding reached as a result of these meetings in textiles, pharmaceuticals, building materials, banking and finance, the chemical industry and other areas.

The Leaders noted with satisfaction the interregional cooperation and linkages.

The Leaders recalled the outcomes of the International Conference “Central and South Asia: Regional connectivity. Challenges and Opportunities” held on July 15-16 2021 in Tashkent.

The two Leaders agreed on the need to fast track measures to further expand the connectivity agenda and economic integration. They acknowledged key role of agreed connectivity corridors which envisage expansion of trade links through offering investment opportunities in the transport network, power pipelines and Special Economic Zones in the interests of the two countries, region and beyond.

The Leaders reaffirmed the important role of the Termez-Mazar-e-Sharif-Kabul-Peshawar railway project for the future of the region. It was agreed to evolve a joint “Road Map”, which includes measures to develop a feasibility study for the project and start construction work on both sides. They acknowledged that the Trans-Afghan Railway project is the most economical and shortest route connecting Central Asia with Pakistan’s ports of Karachi, Gwadar and Qasim.

The two Leaders agreed to strengthen cooperation in the field of air, rail and road connectivity. Recognizing with satisfaction the steady development of bilateral cooperation in security and defense, the two Leaders agreed to intensify dialogue and constructive cooperation between the armed forces of both countries, including through inter-staff talks and joint military exercises, training and exchange of professional experience. They welcomed the establishment of the Uzbekistan-Pakistan Joint Commission on Security which held its first meeting in Islamabad on November 2, 2021.

Prime Minister Imran Khan and President Shavkat Mirziyoyev acknowledged the common cultural heritage and centuries-old fraternal ties and reaffirmed their commitment to further expanding cultural ties and relations between the two nations. In this regard, they welcomed the holding of the first Joint Seminar on the life of Zaheeruddin Muhammad Babur in Islamabad. The Leaders reviewed the progress of joint cultural and media projects, including the translation of Pakistani serials into Uzbek language and joint production on Babur.

The Leaders agreed to strengthen the cooperation between the leading education institutions of the two countries. The Leaders praised the development of cooperation in the field of tourism and welcomed the signing of the Memorandum of Understanding on ziyarat tourism. In order to facilitate tourism and business linkages between the two countries, the Leaders agreed to launch regular flights on the routes “Tashkent – Lahore” and “Islamabad – Tashkent”.

The Leaders expressed deep concern on the continuing trend of Islamophobia. Supporting the efforts of the Organization of Islamic Cooperation to mark the International Day against Islamophobia on 15 March, the sides agreed to cooperate in the UN General Assembly.

Uzbekistan expressed its full support for Pakistan’s candidacy for non-permanent membership in the UN Security Council for 2025-2026. The Leaders agreed to continue providing humanitarian assistance to Afghanistan and emphasized that peace and stability in Afghanistan is essential to advance the connectivity agenda which will lead to regional prosperity.

The importance of economic assistance to Afghanistan and un-freezing of Afghan foreign bank reserves was also stressed. Uzbekistan expressed its gratitude to Pakistan for hosting the 17th extraordinary session of the Council of Foreign Ministers of the Organization of Islamic Cooperation on Afghanistan on December 19, 2021.

Prime Minister Imran Khan briefed the Uzbek side on the latest developments in Jammu & Kashmir, including concerns, position and pressing issues at the moment. The Leaders stressed the importance of cooperation and dialogue to resolve all outstanding regional disputes and achieve the goal of lasting peace, stability and prosperity in the region and beyond.

President Shavkat Mirziyoyev expressed his thanks to the Prime Minister of Imran Khan and the people of Pakistan for the warm welcome and hospitality accorded to him personally and the Uzbek delegation and expressed his best wishes for their continued progress and prosperity. President Shavkat Mirziyoyev invited Prime Minister Imran Khan to pay an official visit to Uzbekistan at a convenient time. The Declaration was signed in duplicate on March 3, 2022 in Islamabad in Uzbek and English. Spokesman Report ISLAMABAD:Prime Minister Shehbaz Sharif Wednesday appealed the nation to follow the anti-COVID SOPs as a surge was being recorded in the coronavirus cases...
Read more
Top Story

Talks with TTP under ambit of constitution: meeting told