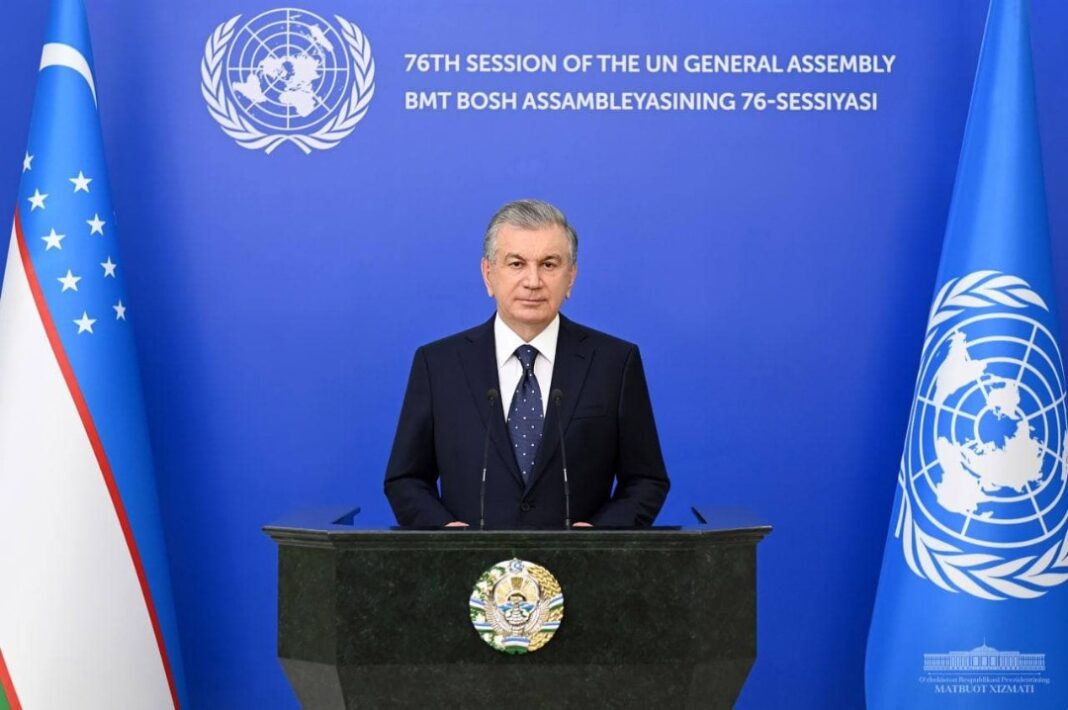 ISLAMABAD: A key meeting on the national security under the chair of Prime Minister (PM) Imran Khan has decided on Tuesday that no concession...
Read more

TASHKENT: President of the Republic of Uzbekistan Shavkat Mirziyoyev has emphasized the growing role and importance of the United Nations and its specialized agencies in the new conditions. In his video message to the 76th session of the UN General Assembly, the Shavkat Mirziyoyev highlighted transnational threats to peace, security and sustainable development are escalating, climatic changes are increasing, massive migration flows are increasing, traditional values are being lost.

In these important processes related to the fate of the whole world, it is the United Nations Organization that is called upon to continue to play a leading role, filling its activities with a qualitatively new content. We support the efforts of the Secretary General aimed at strengthening solidarity and unity in the system of international relations, increasing the efficiency and transparency of the Organization’s activities, the leader of Uzbekistan said.

The President expressed his full support for UN efforts to create opportunities for equal access and equitable distribution of vaccines based on the principle of “leaving no one behind.” We support the further strengthening of the coordinating role of the World Health Organization in the effective response to pandemics and international recognition of the results of vaccination.

The text of the Code on voluntary commitments of states during a pandemic, developed by the Republic of Uzbekistan and distributed as an official document of the UN General Assembly, is our practical contribution to this work, the President continued. The head of our state dwelled on the large-scale and dynamic democratic reforms carried out in the country in recent years, which have become irreversible.

The basis of our democratic transformations is the provision and protection of human rights, freedoms and legitimate interests. We are taking decisive steps to ensure freedom of speech and the media, religion and belief, gender equality and interethnic harmony, the President noted. Attention is drawn to the developed Strategy of New Uzbekistan, the essence of which is to strengthen the role of civil society institutions, protect human rights, reduce poverty, provide every person with a guaranteed source of income and achieve sustainable environmental development.

Our main goal is to become one of the countries with an above-average per capita income by 2030. It should be emphasized that this intention of ours is in line with the UN Sustainable Development Goals until 2030, the leader of Uzbekistan said. In this context, it was proposed to hold in Tashkent an international conference devoted to the study of the problems of restoring the world economy, as well as advanced experience in reducing poverty in the postlike period.

The leader of our country noted that the World Conference on Involving Youth in Global Action, organized in Uzbekistan, was successful, and announced the planned, in continuation of efforts in this direction, the holding of the Global Education Forum in Samarkand as part of the regular dialogues on human rights held here. The head of state expressed his firm intention to further strengthen the new political atmosphere of mutual understanding and respect, good-neighborliness and strategic partnership in the Central Asian region.

Our main task is to turn Central Asia into a prosperous and steadily developing region, an area of trust and friendship. Therefore, we attach priority importance to strengthening interaction with neighboring and neighboring regions, the leader of Uzbekistan emphasized. It was reported about the initiative put forward by Uzbekistan to adopt a special resolution of the UN General Assembly on strengthening the interconnection between Central and South Asia. In this context, it was again emphasized that Afghanistan is an integral part of Central Asia.

Not only are we–neighboring countries, but the whole world interested in establishing peace and tranquility in this country. In the current difficult period, the isolation of Afghanistan should not be allowed, and it should not be left alone with the existing big problems. I am convinced that the role of the United Nations in the Afghan issue must be strengthened and its voice must sound louder than ever” the President said. The leader of Uzbekistan drew attention to the growing threats, conflicts and transnational challenges in the world

Amjad Mehmood Pakistan is yet again placed on the grey list till Feb 2022 by FATF. This news has gripped the country since June...
Read more
Editorial /Articles

China at UN- successful journey of 5 Decades and on.

Vision of Prime Minister of Pakistan – Transparency and development through construction

By: Gohar Zaman Babar After coming into power, the present government focused on improving the performance of national institutions. To further improve the efficiency and...
Read more

ISLAMABAD: A key meeting on the national security under the chair of Prime Minister (PM) Imran Khan has decided on Tuesday that no concession...
Read more
Epaper

TEHRAN: Pakistan and Iran on Tuesday urged the international community to provide financial assistance to Afghanistan to avert any humanitarian crisis. He stressed the...
Read more