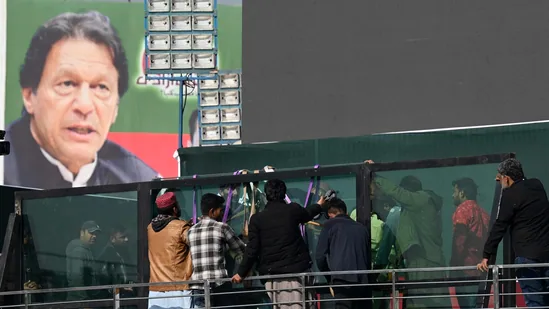 Islamabad : Former prime minister and Pakistan Tehreek-e-Insaf (PTI) Chairman Imran Khan has announced that his party’s “Haqeqi Azadi” march will not head towards Islamabad as he does not want to spread chaos and anarchy in the country.

“They [government] cannot afford Islamabad march… they cannot stop millions from entering Islamabad. We could have created create Sri Lanka-like situation,” he said while addressing the party’s gathering in Rawalpindi on Saturday.

But, he added that the party has decided to quit all legislative assemblies in the country in a bid to force the incumbent rulers to announce early elections.

“If riots take place then things will get out of everyone’s hands. I tried my best not to take any step which could create chaos in the country,” he added.

“Today I am deciding against marching on Islamabad because we don’t want to spread anarchy in the country,” he announced. “We will not remain part of this corrupt system. We have decided to quit all legislative assemblies.”

Imran said he had discussed the matter of stepping down from all legislative with the chief ministers and final decision in this regard will be announced after PTI’s parliamentary party meeting.

“Instead of causing harm to our country it is better to leave this corrupt system,” he added.

The deposed premier earlier landed in Islamabad for the ‘climax’ of the Haqeeqi Azadi march and arrived in Rawalpindi to address his first public gathering after being injured in a gun attack earlier this month.

“When I was leaving for Rawalpindi from Lahore, everyone advised me against travelling due to wounds in my leg,” the former PM said at the start of his address.

Secondly, Imran said his aides also warned him not to address the public rally in Rawalpindi as “three culprits holding top portfolios will attempt again to kill me”.

“Many prime ministers come and go but public never came out in such large number like they gathered here for me,” he added.

Imran said there would be no difference between animals and humans if people of the country accepted the rulers who came to power through ‘NRO’.

“No society can prosper where there is no rule of law.”

Imran said overseas Pakistanis are standing with him because they are aware of the importance of the rule of law.

“If Pakistan is in difficult situation today it’s not because we are short of resources but due to the absence of rule of law.”

Imran said families like Sharifs and Zardaris are responsible for weakening Pakistan’s institutions in a bid to protect their “looted wealth”.

“I felt ashamed when I had to ask for loans from other countries when I was prime minister.”

Despite all challenges including Covid-19, Imran said his government successfully revived the country’s ailing economy.

“What crime did we commit that our government was toppled through foreign conspiracy,” he asked.

However, Imran admitted that he failed to bring powerful under the law. “Because NAB was under the control of establishment and they [NAB] told me that all cases were ready but they were not receiving orders from the top”.

“Establishment was not part of conspiracy but they did not stop their [then opposition] conspiracy to come to power.”

‘There were three shooters’

The former premier claimed that three shooters were deployed in Wazirabad for his assassination plot.

“Mozzam was shot dead by third shooter… a third shooter was there to kill the [prime suspect] so that he does not open his mouth,” he said while likening attempt on his life to the assassination of late prime minster Liaquat Ali Khan.

‘Country is mine, army is mine’ IK

Imran said he criticised institutions including military establishment and judiciary because “I have to live and die here”.

“My criticism of institutions is positive. I want to strengthen the defence of the country. This country is mine… army is mine.”

He said the one who increased his assets and violated human rights will be judged by history as whether his actions benefited or caused harm to the country.

“Freedom has to be snatched. No one serves it out on plate. My movement for real freedom will continue until we free our people from [slavery].”

Imran said he had announced staging a power show in Islamabad to pile pressure on “imported government” and institutions to hold early elections in the country.

“Without a stable government economy can never be stabilised… we came here to put pressure on government and institutions so that they play their role for elections.”

Imran said PML-N chief and former premier Nawaz Sharif was a major hurdle in holding early polls as the former “is taking all decisions sitting in London”.

“The real problem is that convict [Nawaz] sitting in London who is running away from elections… it does not make any difference for Sharif and Zardari if country defaults because their billion are stashed abroad.”

The PTI chief said the country’s economy is sinking fast and inflation is rising. “There is no other way to save economy except holding elections,” he maintained.

“Elections are need of the hour to save the country from going further downhill.” Reporter/ Agencies

Spokesman Report ISLAMABAD: The death toll from the devastating earthquakes in Turkiye and Syria crossed the 5000 mark, as hectic rescue and recovery operations were...
Read more
Top Story

PM Shehbaz Sharif for Unity to Infuse Vigour, Strength to Kashmir Cause