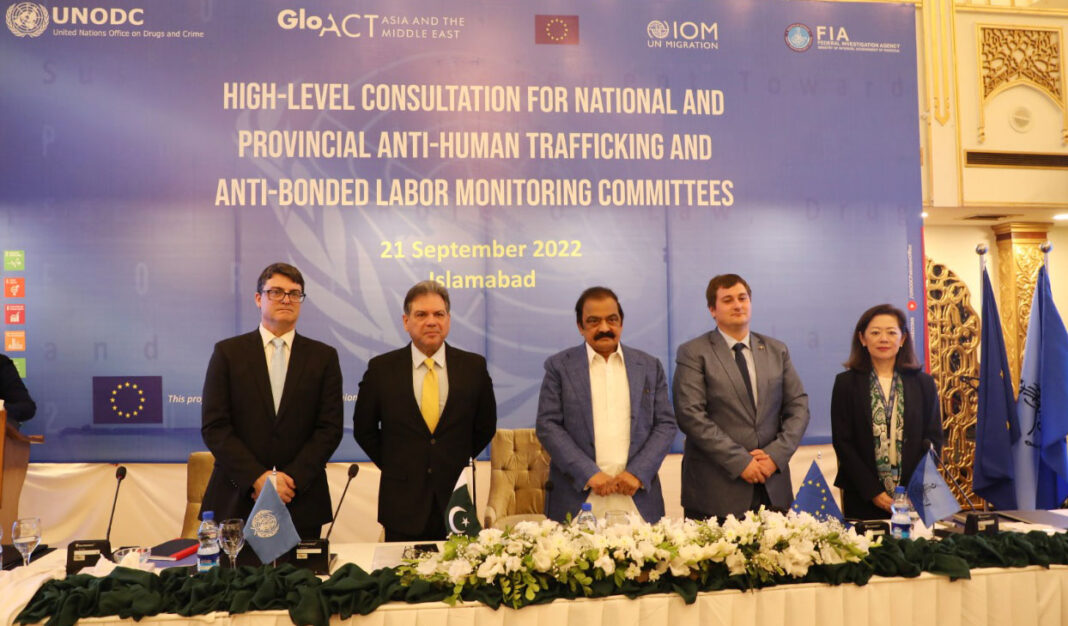 Islamabad – Under the EU-funded GLO.ACT – Global Action to Address Trafficking in Persons and the Smuggling of Migrants (GLO.ACT – Asia and the Middle East), the United Nations Office on Drugs and Crime (UNODC), in collaboration with the Federal Investigation Agency, organized a high-level consultation workshop for National and Provincial Anti-Human Trafficking Committees on 21 September 2022.

This high-level national consultation aimed to provide an opportunity for all the members of National, provincial, and district-level anti-trafficking committees to meet and deliberate on their objectives. There were three main objectives of the consultation. First, there is a lack of understanding of trafficking by law enforcement officers. Secondly, there is a tendency to consider irregular migrants as offenders only but they are also victims. Thirdly, there was a lack of coordination among relevant actors at the federal, provincial, and district levels.

The lack of coordination and understanding of the distinction between trafficking, irregular migration, and smuggling of migrants was well brought out in the consultation. This consultation gave a more holistic framework for coordinated approaches.

During his welcome remarks, Dr. Jeremy Milsom, Representative UNODC Country Office Pakistan, said “Curbing human trafficking and migrants smuggling requires a coordinated response at all levels. Realizing this fact, the government of Pakistan notified provincial and district-level TIP Coordination committees earlier this year. We, as UNODC, are very pleased with this action by Pakistan and commend the efforts. We hope that there would be great coordination and synergy amongst all the stakeholders and that the activities will be conducted in a coordinated matter at all levels including Federal, Provincial, and District levels.”.

He further added, “The foundation for curbing TIP and SOM must be the Palermo Convention on Transnational Organized Crime, to which Pakistan is a signatory. Our approach needs to balance progressive and proactive law enforcement with activities that combat the market forces driving human trafficking and migrant smuggling in Pakistan.”.

During his speech, the Director-General FIA, Mr. Mohsin Hassan Butt, said, “We are improving our identification of potential victims and offering greater support to those who are victims of this abhorrent crime. Trafficking is a gross violation of a person’s basic rights and dignity and disproportionately affects the most vulnerable, especially women and children. We are working jointly with UNODC and the European Union to enhance support to the victims of trafficking and vulnerable smuggled migrants. Our National Action Plan to combat human trafficking and migrant smuggling is victim-centered and addresses the gaps related to it”.

He further added, “We are enhancing our ability to act early and to help other relevant stakeholders within Pakistan to deal with the issue. Police are mandated to investigate crimes of internal trafficking and other departments including labour, child protection, women’s protection, and social services are mandated to provide protection and assistance services to the victims”.

Ms. Mio Sato, Chief of Mission, IOM Pakistan, during her opening remarks congratulated the Government of Pakistan and Federal Investigation Agency for adopting comprehensive counter-trafficking measures, that are also in line with the 2030 Agenda for Sustainable Development and Global Compact for Safe, Orderly and Regular Migration (GCM). She added that “It is critical to strengthen partnerships and collaboration amongst local and national stakeholders in order to ensure efforts are sustainable and holistic. As implementing partner for the GLO.ACT project, IOM has been supporting the FIA on strengthening response on victim protection and assistance and remains available to extend full support to the national, provincial and district-level anti-trafficking committees”.

Eric Hann, Migration Liasion Officer said as part of the EU Strategy on Combatting Trafficking in Human Beings 2021-2025, we are committed to step up cooperation with countries of origin and transit. This is crucial to ensure a comprehensive approach that includes demand reduction; law enforcement and criminal justice response; and assistance and support to victims, in line with priorities that apply both inside and outside the EU. Through our initiatives like GLO.ACT, we encourage capacity building, prevention, protection of victims, and the dismantling of criminal networks.

Minister for Interior Rana Sana Ullah Khan said that our government has a strong political will and commitment to move forward with the work against trafficking in persons.  FIA has already developed a National Action Plan against Trafficking in Persons and Smuggling of Migrants (2021–2025) which aims to promote the detection of trafficking in persons and smuggling of migrants, improve the position of victims and intensify the enforcement of criminal liability.

He also said that if the Action Plan is implemented in its true letter and spirit, this would bring trafficking in Persons cases to ZERO in Pakistan.

The Minister urged Director General FIA and other provincial bodies to work in closer coordination with each and UNODC to achieve the objective of eliminating Trafficking in Persons from Pakistan.

The project builds on a global community of practice set in motion in GLO.ACT 2015-2019 and assists governmental authorities and civil society organizations in targeted, innovative, and demand-driven interventions: sustaining effective strategy and policy development, legislative review and harmonization, capability development, and regional and trans-regional cooperation. The project also provides direct assistance to victims of human trafficking and vulnerable migrants through the strengthening of identification, referral, and protection mechanisms. The project is fully committed to mainstreaming Human Rights and Gender Equality considerations across all of its activities.