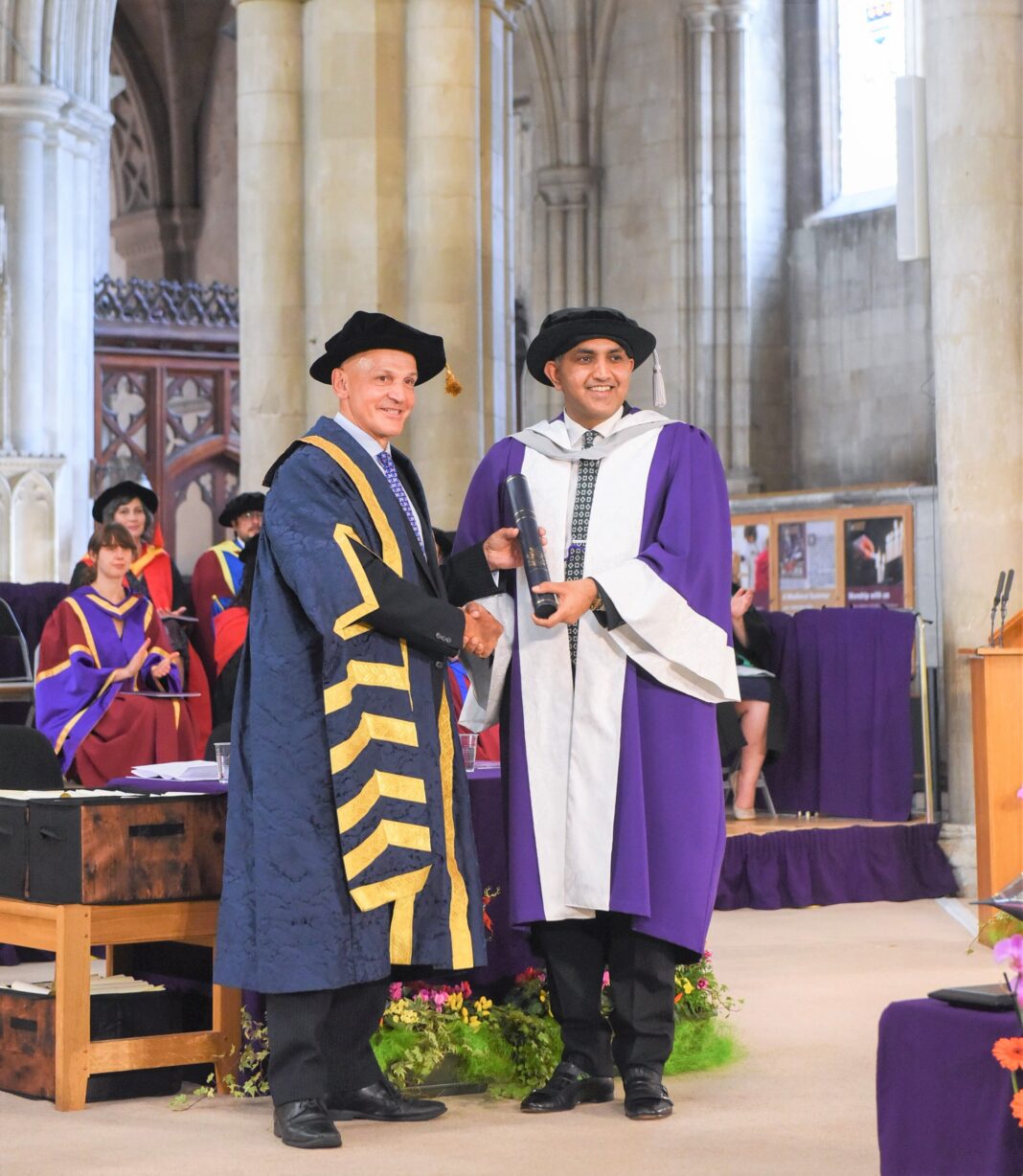 This year, University of Hertfordshire Board resolved unanimously to offer Pakistani educationist Faisal Mushtaq an Honorary Doctor of Education in recognition of his passionate and unmatched contribution to the development of teaching and learning, education and society at large in Pakistan. A graceful ceremony was marked in his honour during the annual ceremonies for the presentation of degrees and diplomas to the graduates of the University held at the historic Saint Albans and Abbey Cathedral in St Albans, Hertfordshire England.

Faisal in his acceptance and commencement speech as recipient of the honorary award of doctor of education for his services to Pakistan said, ‘’I feel most humbled and gratified to receive the doctorate honoris causa from the most prestigious, employable and business facing University of Hertfordshire, which plays such a big part in developing the skills, knowledge and talents of tens of thousands of students who come from more than 100 different countries of the world, and I accept the Honorary degree wholeheartedly on behalf of the hardworking and passionate teaching and learning community of Pakistan – women and men, and children in particular, across our classrooms who have supported me in my professional journey’’.

His powerful message to the graduates, parents and audience resonated across the cathedral with applause when he said, my fellow graduates ‘’In today’s time and age, the only thing which is certain, is called uncertainty, only constant in the world is called change, and the only thing you must learn – is to unlearn and relearn’’. He further expounded the concept of social impact and education in society today, through his five fundamental principles of social equity, inclusion, empathy, sustainability and humanity. He concluded by thanking the University and dedicated his award and recognition to his country, his parents, his wife and children and all teachers and learners of Pakistan.

Citation read by the University’s Pro Vice Chancellor at the St Alans Cathedral mentions Faisal as – dedicated to reforming and improving education and literacy in Pakistan. He is a leading national academic icon, teaching and learning practitioner and a social entrepreneur, and has made a significant contribution to the education system in his home country,Pakistan. It further says, having observed the desire for social change, Faisal understood that education is the key to social impact in a community.

Faisal has also founded a not for profit Change in Education Foundation, which works with the public education system in Pakistan, scaling reforms and opportunities to deserving children all over the country, as well as offering teacher training and working on capacity building, particularly in rural and less privileged areas. The Change in Education Foundation has successfully reformed more than 200 government schools across Pakistan over the last 15 years. In 2013 he was one of the youngest people to be conferred with one of the highest National Civil Awards in Pakistan – the Tamgha-e-Imtiaz, by the President of Pakistan in recognition of his outstanding services to languages promotion, education, literacy, youth and advocacy. He has been recognised as one of the 500 most influential Muslims of the world for three consecutive years from 2014 to 2016 by the Royal Islamic Strategic Studies Centre. In 2012 he was recognised by the Chamber of Commerce and Industry as the Best Young Entrepreneur of the Year 2013, and as Best Educationist of the Year in 2014 by the President of Pakistan. In 2018, he took Oath as the Minister for School and Higher Education, Human Rights, Population and Social Welfare in the interim government, recognition once again of his significant contribution, to the millions of lives he has touched in his home country.

Speaking to the media after the ceremony, an accomplished and gratified Faisal Mushtaq said that “This recognition is dedicated to my country Pakistan, for me teaching and learning is a journey not a destination – the global endorsement further strengthens my pledge to contribute towards a holistic yet inclusive education provision at home aligned with United Nations Sustainable Development Goals SDGs 2030 goals and It shall allow me to reinforce my commitment towards a knowledge society.’’

We believe in a clean & green Pakistan :Chairman CDA

ISLAMABAD: Mohammed Motahar Alashabi, Ambassador Extraordinary and Plenipotentiary of the Republic of Yemen to the Islamic Republic of Pakistan called on Prof. Dr. Muhammad...
Read more