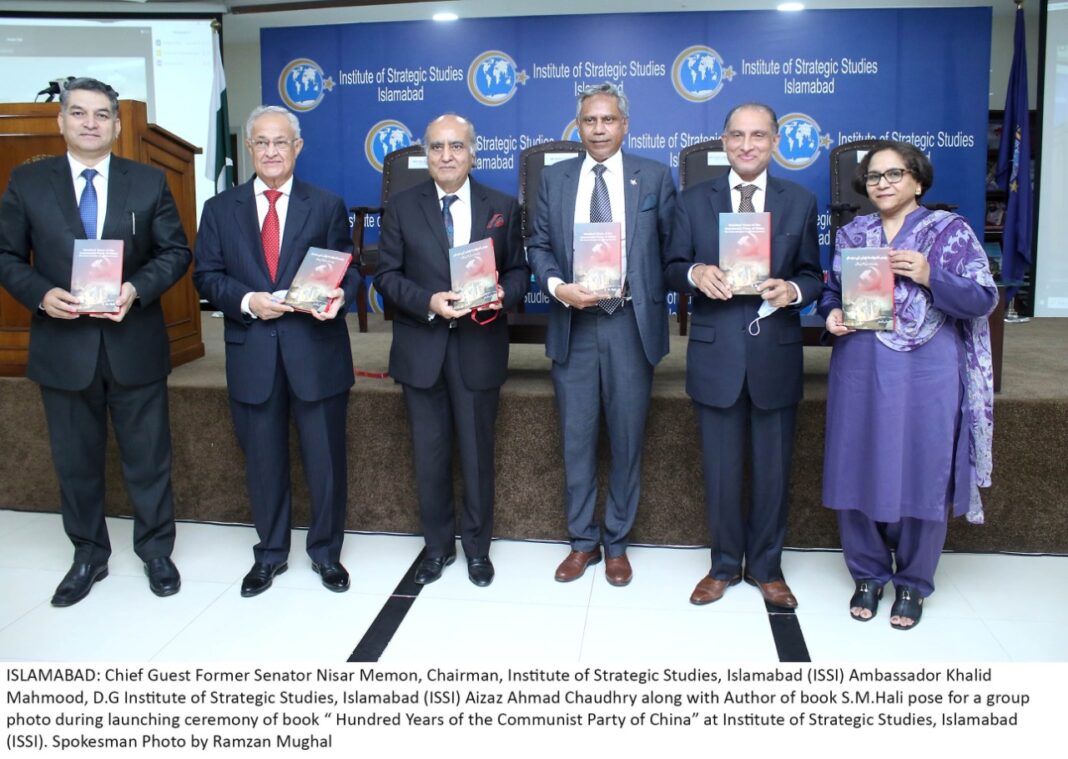 Report by: Naveed Ahmad Khan
Photos by: Ramzan Mughal
Islamabad :China-Pakistan Study Centre (CPSC) at the Institute of Strategic Studies Islamabad (ISSI) organized a book launch event titled, “Hundred Years of the Communist Party of China – The best example of selfless service” authored by S. M. Hali on September 22, 2021. Various distinguished national and international experts attended the book launch event.
In his welcome remarks, Ambassador Aizaz Ahmad Chaudhry, Director General ISSI, congratulated author for producing a timely book. He lauded Mr. Hali for his various works, and roles including as an anchor. Ambassador Chaudhry underscored that during hundred years, CPC has truly transformed China.
S. M. Hali, the author of the book thanked ISSI for launching her book. In his remarks he highlighted key attributes of CPC. He underlined that CPC is a progressive party, which is not mired in archaic traditions and rules which are outdated. He emphasized that CPC has the capacity to look inwards, and apply course correction. Mr Hali said, CPC has strived continuously to make China a better place with remarkable achievements in science and technology and new endeavours to reach outer space.
Senator Nisar A. Memon, in his remarks, lauded Hali for authoring, yet another book, which he termed as an essential reading for those wishing to understand China. Senator Memon commended Hali for producing book in both English and Urdu languages, which he believed would enhance outreach of the book. On CPC, Senator Nisar noted that it has come a long way since its inception in July, 1921. CPC now has become an institutional organisation with vast grass-roots support. Political system of China is designed for people of China, and results are for the world to see.
Dr. Talat Shabbir, Director CPSC, in his remarks, said that author has produced an insightful literature on the CPC at a time when CPC is marking 100 years of its founding.  He noted that the book primarily focuses on the CPC, its establishment, its manifesto and its goal and analyses Chinese democracy under the rules of CPC. He underscored that CPC has been pursuing a policy of strengthening the development of China by transforming and reforming it
Ambassador Naghmana Hashmi, former Ambassador to China, in her remarks applauded Mr. Hali for authoring a book which she believed would enhancing understanding of Chinese political system and CPC in Pakistan. She noted that while two countries are close strategic partners, great work needs to be done to enhance understanding between peoples of two countries.
Ambassador Nong Rong, Ambassador of China in his keynote speech, celebrated book as an achievement of Mr. Hali and termed it is a gift to the CPC on its 100th anniversary. He said, the book discusses great accomplishments of CPC, as CPC continuously strives for global peace and win-win cooperation. He underlined that book by Mr Hali covers major changes in the last century, the challenges in common security, it interprets CPC for better understanding of China, the struggles and hardships of CPC in the last century, specially it mentions the handling covid-19 by the communist party.
Share
Facebook
Twitter
Pinterest
WhatsApp
Linkedin
Email
Telegram
Previous articleDaily Spokesman September 23 2021
Next articlePresident Shavkat Mirziyoyev highlights transnational threats to peace, security
- Advertisement -

Islamabad: The Millennium Universal College (TMUC),Islamabad formalizes Student Council 2021-2022 in an effort to regularizing the student body representatives and to encourage Millennials to...
Read more