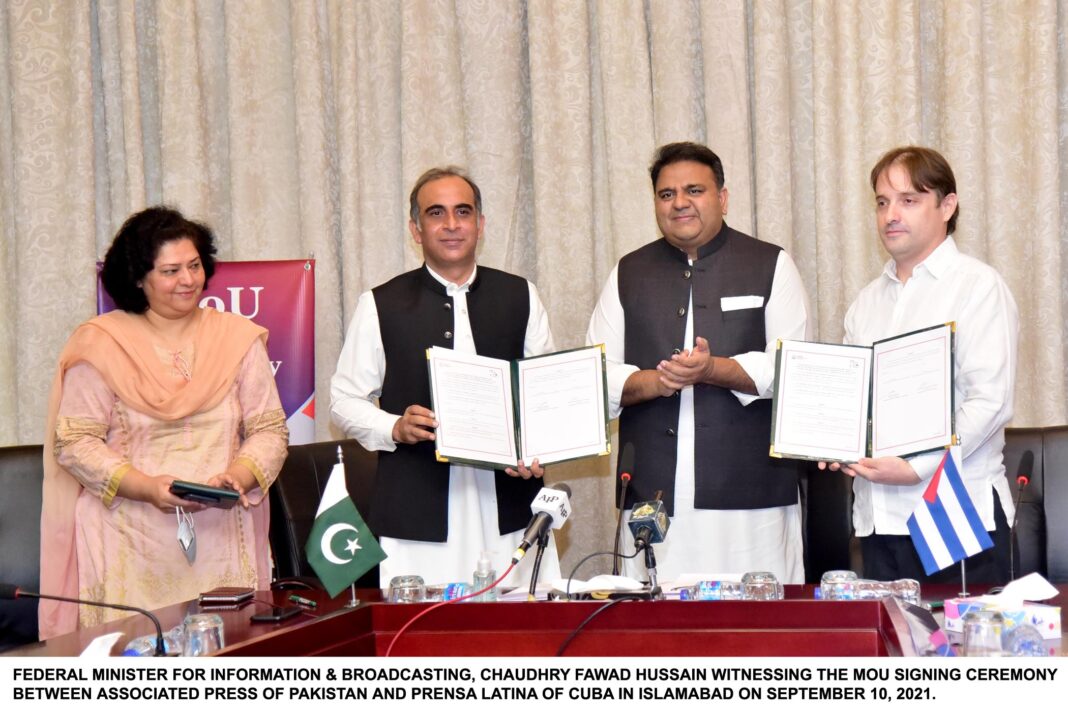 The Cuban envoy thanks Ch. Fawad for taking personal interest in
completion of modalities for signing of agreement

ISLAMABAD: Minister for Information and Broadcasting Chaudhry Fawad Hussain said on Friday that Pakistan stood by Afghan people and would not leave them at these critical times. Speaking on the occasion of MoU signing ceremony between the official news agencies of Pakistan and Cuba, he said that Pakistan had sent humanitarian aid to Afghanistan to avert humanitarian crisis and one C-130 was in Kabul now whereas two more planes would leave for Kabul within this week.

He said that Pakistan was the most important corridor for getting access to Afghanistan. Chaudhry Fawad said that the international community had appreciated Pakistan’s role in the evacuation of media persons and thousands of foreigners from Afghanistan. He said that the world was giving more respect and honour to Pakistan’s narrative now. Pakistan’s official and premier news agency Associated Press of Pakistan have signed a Memorandum of Understanding for the exchange of news with Cuban news agency Prensa Latina. Managing Director APP Mubashir Hassan and Ambassador of Cuba to Pakistan Zéner Javier Caro González signed the agreement.

Minister for Information and Broadcasting Chaudhry Fawad Hussain, Secretary Information and Broadcasting Shahera Shahid and senior officers of the ministry were also present on the occasion. Chaudhry Fawad said that it was a historic day as two leading news agencies were signing an agreement for the exchange of news. He said it was APP’s first agreement with any news agency of Latin America. The minister said that with the signing of this agreement, cooperation between the APP and Prensa Latina would be beneficial for both media organizations. He said that APP would soon also sign news exchange agreements with Tajikistan, Iran, and United Arab Emirates news agencies which would increase cooperation in the information regime.